Who Wants To Be Our Next Punching Bag, Part VI

Share All sharing options for: Who Wants To Be Our Next Punching Bag, Part VI

I know I said we'd take a look at Florida OC Dan Mullen today, but then this article ran yesterday:

Talk is strong that Illinois offensive coordinator Mike Locksley could emerge as the No. 1 target at Syracuse. He has earned plaudits for giving life to the Illini's offense and developing its young stars. And Locksley is flat-out one of the top recruiters in the nation. He turned down the Central Michigan job last year. It's just a matter of time before Locksley lands a BCS gig. And this looks like a nice fit.

So there's no better time than right now to discuss Mr. Locksley: 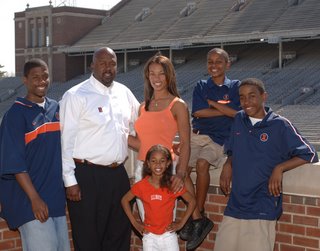 Personal History
Mike Locksley graduated from Towson University in 1992 with a bachelor's degree in business administration and marketing. He was a three-year starting safety on the football team and was named the team's defensive MVP in 1991 as a senior. He finished his career ranked 19th on the school's all-time tackles list. Locksley and his wife, Kia, have four children.

Coaching History
Locksley began his coaching career at his alma mater as the defensive backs and special teams coach in 1992. He quickly made the move to the U.S. Navy Prep School where he took over as the defensive coordiantor for two years. In 1995, he was charged with schooling the outside linebackers at Pacific.

In 1996, Locksley made a change to the offensive side of the ball, taking over as recievers and tight end coach at Army. In 1997 he jumped up to the University of Maryland. As a Terp for six years, Locksley worked as the Maryland running backs coach as well as recruiting coordinator for five of those seasons. In 1999, the Terps led the ACC in rushing yards with 234.1 yards and ranked 12th in the nation behind the running of All-American Lamont Jordan. Jordan, who was the ACC's 1997 Rookie of the Year, also finished as a Doak Walker semifinalist and first-team All-ACC performer. 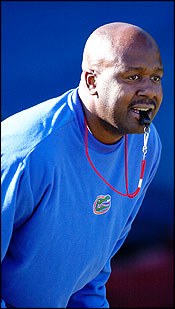 Locksley started working for Ron Zook in 2003 when he became the University of Florida's running backs coach and recruiting coordinator. While on the Gators staff, Locksley was praised for his recruiting abilities, which earned him the recognition of one of the Top-25 recruiters when the 2003 class was rated seventh in the nation by Rivals.com. In 2004, UF running back Ciatrick Fason led the SEC and was 19th in the NCAA in rushing yards, earning second-team All-SEC honors. Overall, the Florida offense ranked first in total yards and second in scoring. In 2003, three Gator rushers logged over 500 yards on the ground and each averaged 5.5 yards per carry.

Lockeley followed Zook to Illinois to become the offensive coordinator for the Illini. He's overseen two of the youngest offenses in Illini history, ranking as the youngest team in the NCAA in 2005 and playing seven true-freshmen on the offensive side of the ball in 2006. Among those freshmen were two Sporting News Freshman All-Americans in quarterback Isiah "Juice" Williams and tight end Jeff Cumberland. Outside of Thomas, Illinois' top rushers were Williams and true-sophomore Rashard Mendenhall, and were led in receiving by true-sophomore Kyle Hudson and Cumberland. Over 60 percent of the total offense in 2006 came from freshmen and sophomores.

Locksley just completed his second year as Illinois' offensive coordinator, marking his 13th year of collegiate coaching. In addition to calling plays for the Illini offense, Locksley tutors the Illini quarterbacks. For the second straight year, Locksley has helped Illinois bring in a top recruiting class. In 2005, he was named a Top-25 recruiter by Rivals.com, then in 2006 was rated the No. 5 recruiter in the Big Ten and among the top-20 in the nation by Sports Illustrated. 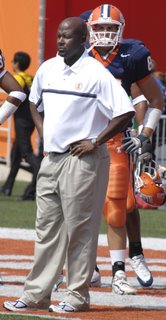 He has no head coaching experience to date, so there's always that risk. Maybe he's a masterful role player but not a leader. Or maybe he is. Such is the chance (And we know the consequences of that).

What's It Gonna Cost?
Wasn't able to find out what he's making now but I'm sure its not anything like some of the other guys we've looked at. We could probably get him for mid-to-high six-figures, which would be just fine.

Would He Take It?
One gets the sense he's ready for a head coaching gig and he's paid enough dues and done enough good work to merit BCS school consideration. He turned down the offer from Central Michigan last year, likely because he knows he can do better. Syracuse is a good program for a person in his position...expectations are low but the the payoff could be huge. I'm sure he'd listen to our offer.

Would Fans Want Him?
It's a bad time to be an untested coordinator looking for their first head-coaching gig with us. We don't want to get burned again. But this guy brings something to the table Greg Robinson never did. Recruiting expertise. The connections, knowledge and in-roads he brings with him could be invaluable to us right now. Also, he's a running back's dream coach, having played a part in the maturation of quite a few great college runners. His knowledge fits nicely with the components we have in place already.

I think it might be an uneasy handshake at first but Syracuse fans would warm to Locksley, especially if he can bring in one of those bigtime recruiting classes within the first two years.

Tuesday: Dan Mullen (I mean it, this time)