Who Wants To Be Our Next Punching Bag, Part V

Share All sharing options for: Who Wants To Be Our Next Punching Bag, Part V

The quest for the right candidate for Syracuse, on the ever-so-slim chance they need a new football coach next season:

Today we look to the NFL for help, namely one Tom Coughlin:

Thomas Richard Coughlin was born on in . Coughlin was a standout scholastic star at Waterloo (N.Y.) , where the football stadium now bears his name. He was a three-year letterman for the Syracuse Orangemen and legendary coach Ben Schwartzwalder from 1965-67. A wingback, Coughlin played in a backfield with All- backs Larry Csonka and Floyd Little. As a senior in 1967, Coughlin broke ’s single-season pass receiving record. That year, he won ’s Orange Key Award as the university’s outstanding scholar-athlete. He graduated in 1968 with a bachelor’s degree in education and received a master’s degree in education the following year.

Coughlin began his coaching career in 1969 as a graduate assistant at . He quickly made the transition to head coach, taking over the role at the Rochester Institute of Technology from 1970-73, compiling a record of 16-15-2. Coughlin returned to in 1974, first serving as quarterbacks and offensive backfield coach for three seasons before being promoted to offensive coordinator for four years. He directed an offense that led the Orangemen to victory in the 1979 Independence Bowl, their first postseason triumph in 13 years.

In 1981, Coughlin left for to coach the quarterbacks. He helped the Eagles win their first bowl game and coached Doug Flutie (albeit the year before THAT year). In 1983, won the Lambert-Meadowlands Trophy as Eastern Champion, its first in 42 years, whatever that means. 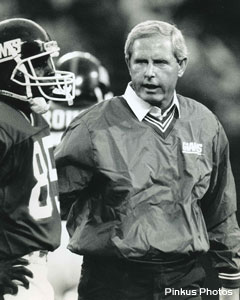 Coughlin entered the NFL as the Philadelphia Eagles’ wide receivers coach in 1984 and ‘85. He held the same position with the Green Bay Packers in 1986 and ‘87 before moving to the Giants for a three-year stint. Coughlin was the Giants wide receivers coach under Bill Parcells from 1988-90. Under his tutelage, receivers such as Mark Ingram, Lionel Manuel, Odessa Turner and Stephen Baker all improved and helped the Giants win their second Super Bowl.

1991 marked Coughlins return for the college ranks, a return to Boston College and his return to the head coaching position. He went 4-7 his first season but quickly turned the Eagles into contenders in 1992 when they finished 8-2-1. He was 21-13-1 in three seasons (1991-93) with the Eagles, including 9-3 in 1993, when Boston College won eight consecutive games, defeated top-ranked Notre Dame, 41-39, and beat Virginia in the Carquest Bowl. Coughlin’s last team was ranked 12th in the USA Today/CNN coaches poll and 13th by the Associated Press, despite starting the season 0-2.

Coughlin's success at BC led to his subsequent hiring as the first head coach of the NFL's expansion Jacksonville Jaguars. In 8 seasons at Jacksonville, he helmed the most successful expansion team in league history, leading the Jaguars to the AFC Championship game twice, the first time being only the second year of the team's existence, 1996, where he lost to Bill Parcells' Patriots, but he was still named NFL Coach of the Year. Coughlin would again take the Jaguars to the AFC Championship Game in 1999 after a 14-2 regular season before the Jags were bested by Tennessee Titans. 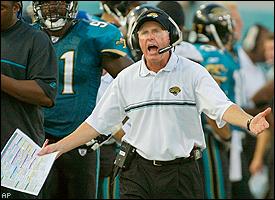 Coughlin compiled a 68-60 regular season record and a 4-4 playoff record in 8 seasons as the Jaguars head coach. The Jaguars made the playoffs every year from 1996-99, the only expansion team in history to earn four postseason berths in its first five seasons. However his remarkable early success eventually gave way to a disappointing final three seasons in Jacksonville. After a 6-10 finish in 2002, the Jaguars fired Coughlin.

After being out of coaching for a year, Coughlin returned to the sidelines with the New York Giants in 2004.

Coughlin inherited a team that finished 4-12 in 2003, but led the Giants to a surprising 5-2 start in his first season as head coach. After back-to-back losses in quarterback Kurt Warner struggled, Coughlin made the decision to bench Warner and start rookie Eli Manning. Coughlin received criticism from some who felt the move amounted to a surrender of the 2004 season when the Giants were still in playoff contention. The Giants would go on to lose six of the seven games started by Manning, and finish 6-10.

Coughlin's early move to Manning, though, would pay dividends in 2005, as Manning and the Giants went 11-5 in Coughlin's second season and won the NFC East for the first time since 2000. It was also the Giants first postseason performance since making it as a Wild Card in 2002. However, a very poor performance by Manning and the defense saw the Giants get shut out 23-0 at the hands of the Carolina Panthers at Giants Stadium. Following the game, Giant star running back Tiki Barber called out Coughlin and his offensive coordinator, not the last time the two would clash.

Heading into the 2006 season, expectations for the Giants were high. In just over two years as the Giants head coach, Coughlin transformed the Giants from an underachieving, last place team into a possible Super Bowl contender. The Giants struggled early during the 2006 campaign, going 1-2 in their first three games. After a particularly bad loss, tight end Jeremy Shockey stated that the Giants had been "outplayed and outcoached." The Giants rebounded by winning their next five games to go 6-2. However, the Giants suffered a stunning second half collapse, losing 6 of their next 7 games to fall to 7-8 heading into the last game of the season. After a late November loss to the Jaguars, Coughlin and his coaching staff were once again criticized by a player, this time Tiki Barber. Things took another turn for the worse the next week when the Giants 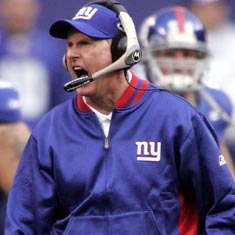 blew a 21 point fourth quarter lead and lost to the Titans, finishing 7-9.

Speculation was high going into the 2006 season that Coughlin's job was in jeopardy. Tiki Barber's announcement of his intentions to retire after the 2006-07 season didn't help matters. The Giants once again started the season hot and faded in the second half, barely making the playoffs on the last game of the season. The Giants lost to the Eagles, 23-20, in the first round of the playoffs, a disappointing finish to a disappointing season.

With many feeling that Coughlin didn't deserve another chance, he received a one-year extension on his current contract in January 2007. Speculation was (and still is) that unless the Giants advance further in the playoffs than they previously have under him, Coughlin will be fired at the end of the season. The Giants are currently 6-2 but a sense of impending doom hangs over the second half of the season as it has every season under Coughlin as fans wonder if another collapse is coming.

Violations & Personal Issues
To say Tom Coughlin has a reputation for being a disciplinarian would be an understatement. While his style might have been seen as necessary in the college game, its never worn well in the pros. Here's an excerpt from an article in the New Yorker about Coughlin:

His nicknames include Tom the Tyrant, Major Tom, the General, and the Principal (which is what he looks like). His favorite movie, needless to say, is "Patton." In a recent Sports Illustrated poll, current and former players voted him the worst coach in the National Football League. Three Giants have filed grievances—still pending—with their union, the Players Association, because they were fined for being a couple of minutes early to team meetings, which is, by Coughlin’s accounting, late. ("Meetings start five minutes early," Coughlin has said, and, as if to confuse matters more, he has ordered the clocks in the Giants’ locker room set five minutes ahead.) Last spring, several more Giants registered complaints with the union, saying that Coach Coughlin had violated off-season training restrictions with a gruelling workout schedule. (They won a two-day reprieve.) Among pro football’s many Dracos, "Coughlin stands alone," a Players Association spokesman said last week.

That said, for all the complaining Tiki Barber did about Coughlin's style, it is a huge part of the reason he stopped fumbling, became a superstar and is now getting paid to talk about paprika on a daily basis.


Recruiting
Tough to say at this point. He had a lot of things working for him in 91 when he took over at BC. He's a Northeastern guy, his no-nonsense style probably went over well with some parents, lots of experience. But now he's got some baggage. And if he returns to the college game, are parents going to be interested in turning their kids over to a tyrant? And do 18-year-old kids want to play for him?

Snags
The Giants are doing much better than expected and Coughlin isn't on the hot seat...but as Giants fans know that could all change very quickly. Coughlin's teams have a history of starting hot and finishing cold and the Giants just wrapped up the easy part of their schedule. Regardless, Coughlin may do enough to prove he deserves another extension and therefore eliminate himself.

What's It Gonna Cost?
Coughlin makes $3M right now and if Syracuse wanted him, he probably wouldn't be taking too much of a drop-off. He could very well be out of our range before we even start talking.


Would He Take It?
If the Giants were terrible, I'd say he'd be interested. Alma mater, he knows the lay of the land, he'd be feted upon arrival (inasmuch as a lame duck NFL coach can be). But clearly Coughlin loves working for the Giants and wants to continue to do so. The Giants most likely will make the playoffs and he will continue to be in their employ.

Would Fans Want Him?
I could see a major line in the sand drawn between Orange fans over Coughlin. On one hand, he's a proven winner in the college game (albeit over a decade ago), he's "one of us" and his no-bullshit style would be a welcome replacement for Robinson's "dag nabbit" schpiel.

But on the other hand, his tyrant way could rub a lot of people the wrong way. And what about the fact that he's done a much poorer job with the Giants than people care to admit. The last two seasons he had the talent to make a run at the Super Bowl and he has yet to find a way to make this team a winner when it counts.

So basically, how you feel about Coughlin probably depends on whether or not you're also a Giants fan. And if that's the case, you're up shit's creek cause you're damned if you do, damned if you don't.