Who Wants To Be Our Next Punching Bag, Part IV

Share All sharing options for: Who Wants To Be Our Next Punching Bag, Part IV

Be sure to check out Part I (George O’Leary), Part II (Paul Johnson) and Part III (Randy Edsall) in the search for Syracuse's next football coach (assuming we need one, of course).

Personal History
Larry Edward Coker born June 23rd, 1948 in Okemah, Oklahoma. He played defensive back for three years at Northeastern State in Tahlequah, Okla. Coker met his wife, Diane, in high school. They are the parents of a daughter and the grandparents of twin boys.

After six years at Fairfax, Coker was hired at Claremore high school, just outside Tulsa. John Cooper was coaching Tulsa at the time and recruited one of Coker's players. A year later, Cooper offered Coker a job coaching the running backs and quarterbacks at the University of Tulsa. Coker took a $2,000 pay cut and took the job. He joined Tulsa in 1979 and became offensive coordinator in 1980. He kept that position for three years and Tulsa won three Missouri Valley Conference championships during his four seasons there.

After Tulsa, Coker spent seven seasons as the offensive coordinator at Oklahoma State. In his seven seasons with the Cowboys, he coached 1988 Heisman Trophy winner Barry Sanders and the team went on to win four bowl games.

Loyalties be damned, Coker jumped ship to the University of Oklahoma after that. From 1990-92, Coker was the offensive coordinator, assisting the Sooners to two bowl victories.

Then, Coker did an about-face and went defensive. Coker spent 1993 and 1994 at Ohio State coaching the defensive backfield. The Buckeyes participated in two bowl games during his tenure and were Big Ten co-champions in 1993.

Finally in 1995, Coker arrived in Miami when Butch Davis hired him to run the offense and be quarterbacks coach. While the offensive coordinator, UM went 51-20 overall and 33-9 in conference play and the Hurricanes won all four bowl games during that six-season span. 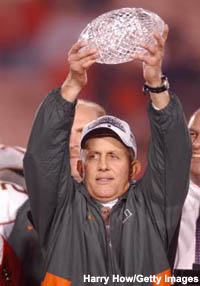 When Davis left to coach the Cleveland Browns, he handed the keys to the most desirable position in college football (at the time...) to Coker. He was taking over a team that just missed a chance at playing for the national title and returned much of its nucleus. The success was immediate as Coker guided the Hurricanes to a 12-0 record and the national championship in his first season. Coker was given numerous honors, including the Bear Bryant National Coach of the Year Award and the 2001 (AFCA) Coach of the Year Award.

2002 played out almost the same way 2001 had, except for the way it ended. The Hurricanes won their first 12 games in 2002, giving Coker an unblemished 24-0 record heading into the National Championship Game against Ohio State. In a controversial game, the 11 1/2-point underdog Buckeyes defeated the Hurricanes 31-24 in two overtimes. Despite the loss, Coker tied Walter Camp for the best record by a college football head coach in his first 32 games (31-1).

In 2003, things took a different turn when a pair of late season losses kept Miami out of national title hunt for the first time during Coker's tenure. Miami still won a share of the Big East Conference and defeated Florida State twice in the season, the second time in the Orange Bowl. They finished with an 11-2 record and ranked fifth in both polls. 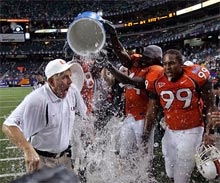 In 2004, Miami's first season in the ACC, Miami finished with a somewhat disappointing 9-3 record and #11 ranking in the final polls. Miami did end the season positively by beating Florida 27-10 in the Peach Bowl.

In late September 2005, Coker agreed to a five-year contract extension with the university. The new contract paid Coker in the neighborhood of $2 million per season, which made him one of the highest-paid coaches in college football.

However, the 2005 season ended on a disappointing note for Coker and Miami, as the Hurricanes lost 2 of their last 3 games, including a 40-3 loss to LSU in the Peach Bowl, the worst bowl loss in school history. The loss was marred by a postgame fight in the tunnel leaving the stadium, and it was evident that Coker's team quit on him in the 2nd half of the game. In the wake of the loss, Coker fired four longtime Miami assistants. The school finished 9-3 for the second consecutive season.

Coker drew tremendous criticism after the season, as his teams were producing diminishing results since his first season. For the first time in his career, Coker was reported to be on the hot seat entering the 2006 season.

Miami began the 2006 season 1-2, with losses to Florida State and Louisville, leaving the team unranked in the AP Top 25 for the first time since 1999. After rumors following the Louisville loss that Coker's firing was imminent, Miami Director of Athletics Paul Dee gave Coker a vote of confidence, stating that he would coach at least through the end of the season.

After the team's win against FIU, which was marred by a bench-clearing brawl, questions were raised in the media as to whether Coker would resign or be fired, but he was again given a vote of confidence by the school administration. By the time they were 5-3 and hosting Virginia Tech, it was the first time Miami had been an

underdog at home in Coker's six seasons as the coach. The team lost and fell to 5-4 and just 2-3 in the ACC, and suffered its first four-loss season since 1999.

Miami defeated a ranked Boston College team on Thanksgiving to finish the regular season 6-6. Revealing an apparent lack of communication between Coker and UM President Donna Shalala, Coker predicted after the loss that he would be back as head coach in 2007. The following day, however, Coker was fired as head coach.

In January, 2007, Coker interviewed for the head coach position at Rice. According to several media sources, Coker was one of two finalists for the position. However, Rice selected David Baliff instead.

Violations & Personal Issues
If there's any one incident that hangs over Coker, its the FIU Brawl. Whether fairly or not, the question as to whether or not Coker had any control over his players and his program haunted the rest of his time at Miami, especially when coupled with the brawl with LSU at the Peach Bowl and the Louisville-logo-stomp earlier in the year.

Recruiting
Honestly, I don't know what to make of Larry Coker the recruiter. Look at his recruiting classes...#4 (2002), #6 (2003), #3 (2004), #12 (2005). That's pretty friggin good. But how much of that was Larry? I just don't know how much of a role a grandpa from Oklahoma played in attracting the star players to Miami. Me thinks the program and the fact that it was doing so well was really what brought in the talent.

And even if you give Coker credit for the recruiting, what does that say about his coaching ability that he wasn't able to sustain the same level of excellence with these blue chippers? A team made up of all of the guys from those recruiting classes went 7-6...how is that possible?

Snags
Coker's a free agent so there aren't too many things holding him back from getting another job.

What's It Gonna Cost? Coker was making about $2 million/year at Miami. I would have to think his price has come down since then, considering it was a contract he signed in the wake of national title appearances. That he was angling for the Rice job last year also means he's probably willing to work for not much more than we're paying Robinson.

Would He Take It?
The man tried to get the head coaching job at Rice last year. We're bad, but I'd like to think we bring a little more to the table than they do. If he's willing to take that one, he'd jump at the chance to coach for us.

Would Fans Want Him?
A nice-guy, lifetime assistant who finally got his chance to be a head coach and ultimately couldn't maintain the level of excellence the program required of him? Where have I heard that before?

In ways he reminds me of Pasqualoni (looks much better on paper than reality) and in other ways he reminds me of Robinson (better suited as an assistant, nice guy, unable to build up). I don't think its in Syracuse's best interest to have another head coach who reminds us of either of those guys.