Who Wants To Be Our Next Punching Bag, Part III

Share All sharing options for: Who Wants To Be Our Next Punching Bag, Part III

Before we look at today's candidate, one note about O'Leary that I wanted to make mention of, his "code red" incident from a few years back. Whether he becomes SU's coach or not, hopefully O'Leary has learned from his mistake but its certainly another incident worth noting in a career full of "incidents." Thanks for sending, James.

Today let's look at a classic "one of us" guy who just so happens to be coaching one of our rivals...Randy Edsall. 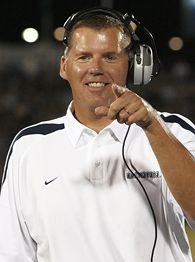 Personal History
Randy Edsall was born in Glen Rock, Penn., where he was a three-year letterwinner in football, basketball and baseball at Susquehannock High School. He was an all-state selection in all three sports his senior season. He then came to Syracuse, where he was a member of the football team and earned one varsity letter as a quarterback. He was a member of the 1979 team that won the 1979 Independence Bowl. Edsall earned a bachelor's degree in physical education in 1980 and a master's degree in health and physical education in 1982, both from Syracuse. He is a member of the York Area Sports Hall of Fame.

Coaching History
Edsall began his coaching career in 1980 at his alma mater, Syracuse University. Edsall started as a graduate assistant from 1980-1982. In 1983, coach Dick MacPherson named Edsall running backs coach. He coached the running backs for three seasons at Syracuse (1983-84 and 1986) and coached the tight ends in 1985 before making the switch to the defensive side of the ball. He coached the Syracuse defensive backs from 1987-1990 and during that period the Orangemen were ranked amongst the National Division I-A leaders in pass defense.

In 1991, Edsall moved on to Boston College and joined Tom Coughlin's staff. He coached the Eagle defensive backs for three seasons (1991-1993) When Coughlin jumped to the Jacksonville Jaguars in 1994, Edsall followed.

In his three seasons on Tom Coughlin's staff, Edsall was a part of one of the most successful expansion franchises in the history of the NFL. The Jaguars reached the playoffs in 1996 and 1997, including a berth in the AFC Championship Game in 1996.

In 1998, Edsall returned to college football as the defensive coordinator at Georgia Tech under George O'Leary, where he helped the 14th-ranked Yellow Jackets complete a 9-2 campaign and earn a New Year's Day win in the Gator Bowl over Notre Dame. Georgia Tech finished 7-1 in the ACC and earned a share of the league championship with Florida State.

On December 21, 1998, Edsall was named the 27th head football coach at the University of Connecticut replacing Skip Holtz. The Huskies went 4-7 in Edsall's first season, which would be their last in Division 1-AA. They made the leap to Division 1-A and the impact was immediately felt. They went 3-8 and 2-9 in the first two seasons as an Independent. 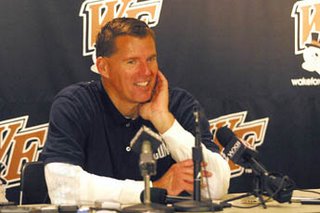 2004 was UConn's first year in the conference and didn't disappoint, going 8-4 (losing 30-42 to Syracuse) and defeating Toledo in the Motor City Bowl, their first. 2005 and 2006 were step-back years for the Huskies, as they finished with 5-6 and 4-8 records respectively.

The Huskies are currently 6-1 and back on track for a bowl game, although you could argue that they're two horrible calls away from being 4-3.

Violations & Personal Issues
He's had a few issues with the players on his team, but who hasn't? Then again, its UConn so you have to allow for some illegal hijinks now and then.

Recruiting
Recent recruiting class rankings have been 53rd (2007), 66th (2006), 59th (2005), 79th (2004), which are all lower than Syracuse's ratings. However, UConn has posted better records in those timeframes and this is also factoring in that their program has existed in this Division for about 7 years. So perhaps there's something impressive about Edsall's ability to recruit as well as he has in the Northeast, especially with Rutgers now making its case.

Snags
If it comes out that this is a possibility (which it already kinda has), you better believe UConn will pull out all the stops to keep Edsall in-house. They don't want to lose the architect of their program to a conference rival, let alone us.

What's It Gonna Cost?
According to CoachesHotSeat (and what better authority is there?), Edsall is making $845K/year. That's less than Robinson, which would make it just fine to offer him about what Robinson's making now. We're not worse off financially, except for all that buying out, of course.

Would He Take It?
Including his time as a student, athlete and coach, he was a part of the Syracuse family for fifteen years. You better believe he's got a soft spot for us. In fact, the word on the street is that he's already putting feelers out to SU in case Robinson does get canned.

Would Fans Want Him?
I think his history with the university puts him just on this side on Yes. He's done well at UConn but he hasn't knocked our socks off. Is he the savior? I don't know. He didn't build the UConn 1-A program from scratch but he did do a solid job with what he had. And getting him instantly weakens our Northeastern rival, leadership-wise and recruiting-wise. He's not the kind of guy we'll hire and ticket sales will go through the roof but he's probably a safer bet than most.