Who Wants To Be Our Next Punching Bag, Part I

Share All sharing options for: Who Wants To Be Our Next Punching Bag, Part I

We've got some space to fill over the next two weeks as we face a weekend that will not bring a debilitating halfback leg injuries, no Andrew Robinson's jersey grass stains and no car-crash-can't-look-but-I-have-to Greg Robinson press conferences.

Greg Robinson "saved" his job last weekend, whatever that means. More likely than not, Robinson delayed the inevitable question..."Is this good enough to bring the guy back for one more?" There are just too many factors that point no, not the least of which is that the Carrier Dome is hemorrhaging money during football games.

Assuming that the Orange cannot put together winning gameplans for Pitt, UConn, South Florida and Cincy, they will finish 2-10 and more likely than not the school will find a way to get out of Robinson's contract. But that leaves us with an even trickier question...who do we replace him with? Do we go with a tenured coach with a proven track record? Can we afford one? Or do we roll the dice with an up-and-comer? Can we afford to take that chance again?

So many options, so many choices... How bout we take a look at them? Every day for the next two weeks we'll take a look at a new "candidate" for the Syracuse head coaching job. If between now and the end of the season Greg Robinson rattles off a couple more wins and the Orange are heading in the right direction, that's great news and we'll look forward to the team's continued success in 2008. But if the team's fortunes continue down the same path and we're forced to find new leadership...best to be prepared.

Apologies to MGOBlog but I'm stealing his format for this exercise. Now if only I could steal his head coach prospect...

Today let's look at a name that's been coming up recently in the papers and rumor mills...George O'Leary.

O'Leary parlayed that success into a job at Syracuse, where from 1980-86 he coached the defensive line. In his final two seasons at SU, he became assistant head coach to Dick McPherson.

O'Leary left the Orange for Georgia Tech where he held the defensive coordinator/defensive line coach position from 1987-1991. He was there for the 11-0-1 national title run of 1990 (Remember that? Seems so weird so say it now...)

O'Leary continued his climb up the ladder to the NFL, following Bobby Ross to the San Diego Chargers where he served as defensive line coach in 1992 and 1993.

In 1994, with three games left in the season, O'Leary took over as interim head coach of the Georgia Tech Yellow Jackets. The team was 1-7 only three years removed from a national title and needed to be turned around. O'Leary was officially named head coach prior to the 1995 season and after two sub-par years, O'Leary rebuilt the program. The 1997 team won the Carquest Bowl. O'Leary's 1998 team went 10-2, defeating Georgia for the first time in 7 years, en route to a Gator Bowl victory. For the remainder of his tenure through 2000, the team went to a bowl game every season.

His numbers in Atlanta were extremely solid. O'Leary won the Bobby Dodd National Coach of the year in 2000 and the ACC Coach of the Year Award in 1998 and 2000. During his seven-year stint at Georgia Tech, O'Leary guided the Yellow Jackets to a 52-33 (.612) record, including five bowl appearances. From 1995-2001, Georgia Tech recorded five winning seasons in six years, including the 1998 ACC Co-Championship.

In 2001, the "Notre Dame incident" happened and we'll get to that in sec but as you probably know, O'Leary's meteoric rise through the coaching ranks bottomed out and he was, briefly, an unwanted man. But certainly, in a game where people like Lawrence Phillips and Tank Williams get second chances all the time, there was room for George.

In 2002, O'Leary was hired as the defensive coordinator and defensive line coach for the Minnesota Vikings and served for two seasons. He was credited with improving the 2002 Vikings defense to 10th in the NFL, after it was ranked 30th in 2001.

With his integrity on the mend, O'Leary accepted the head coaching position at the University of Central Florida in 2004. A far cry from South Bend or even Atlanta, the small Division 1-A program was the perfect place for O'Leary to rebuild his credentials in relative anonymity.

In his first season, the Knights posted their worst season in school history with an 0-11 record. However, the team rebounded in 2005 after joining Conference USA. The team finished the season with an 8-3 (7-1) record and hosted the first-ever CUSA championship game (a loss to Steve Kragthorpe's Tulsa). UCF would play in the Hawaii Bowl, losing to Nevada. O'Leary was named Conference USA Coach of the Year in addition to being named National Coach of the Year by CBSSportsLine.com and SportsIllustrated.com.

In 2006, however, things went backwards for the Golden Knights. The 2006 season was a disappointment with a 4-8 (3-5) record. But in 2007, UCF is seeing great strides in the growth of its program again. UCF opened the 2007 season with a 25-23 victory against NC State, the 1st BCS victory of the O'Leary era. They opened their home campaign in a brand new 45,000 seat stadium against Texas. The Longhorns won, but not easily. The Knights also played South Florida tough before losing. They are currently 4-3 (2-1) and on pace to return to a bowl game.

Violations & Personal Issues
O'Leary's first brush with the infractions folks came at GT. During an NCAA investigation, it was revealed that the Georgia Tech football program used ineligible players. Although these infractions were deemed inefficiencies by the administration and not specifically by O'Leary or his staff, Georgia Tech was forced to vacate wins and stats for games in which these ineligible players participated. (This was later overturned).

In 2001, O'Leary left Georgia Tech to take over as the head coach for the University of Notre Dame. Five days later, O'Leary resigned after he was discovered to have lied on his resume. On the resume, O'Leary claimed that he had earned a master's degree from NYU when in fact he only attended the school but never graduated. He also claimed that he had earned three letters in football 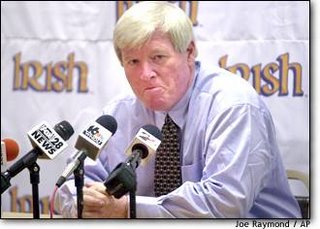 while attending the University of New Hampshire, when the school claimed he had not even played in one game. When further background checks found that O'Leary had falsified his academic credentials, as well, Notre Dame asked for his resignation.

"Due to a selfish and thoughtless act many years ago, I have personally embarrassed Notre Dame, its alumni and fans."

While O'Leary and everyone else seems to have moved on from the situation, its a taint that will stick with him for the rest of his career.

Recruiting
While I don't have the numbers from his Georgia Tech days, you have to surmise from his ability to take over a 1-7 team and put them in five consecutive bowl games within two years, that the man can recruit. As for his time at UCF, you can read the numbers a little more clearly. According to Scout.com, his recruiting classes for the last three seasons were rated 78th (2005), 87th (2006) and 61st (2007). Not horribly impressive at first, but when you realize Syracuse has been in the 50-ish range in that same time period, you realize UCF isn't that much father behind a BCS school like us. In fact, last season's recruiting class tied Houston as the top class in C-USA.

O'Leary is a New York guy so you can imagine that would give him a boost recruiting for a school like Syracuse.

Snags
Wherever O'Leary goes and whatever he does for the rest of his career, the "Notre Dame incident" will always be there looming. Fairly or unfairly, his character will be called into question more often than it should. It's not something that's going to affect X's and O's, but maybe it has an effect of recruiting. Maybe some parents view him as a cheater and don't want their kid playing for him? And he'll certainly be under more stringent scrutiny anytime something goes wrong with a player or the program in general.

The other thing to consider...look at O'Leary's career trajectory. He conquered every level of coaching, in order, in relatively quick time. The Notre Dame job was the coronation on a fantastic career. Then it all came crashing down. Now O'Leary is working his way back up. He'll probably parlay the UCF job into a BCS head coaching gig somewhere, if not here, within the next two years. The question is...will that next job be the vindicating one? Or is that the final stepping stone to the real vindication? Would we just be another 2-3 year stepping stone to the Miami job or the Penn State job? Tough to say.

What's It Gonna Cost?
According to CoachesHotSeat (and what better authority is there?), O'Leary is making $1.03/year, which is more than Greg Robinson currently makes. If its true that Syracuse will have to pay a heft buyout on Robinson to fire him after this season, would we really be able to do that and pay for O'Leary? Especially considering he's probably going to want to make at least $1.5-$2M/year. This could be a major sticking point.

Would He Take It?
Go back to what I said in the Snag section about O'Leary's trajectory. George O'Leary was college football's golden boy, figuratively and quite literally, and it all went away in an instant. In theory, George O'Leary should be the most wanted man in college football right now. If everything had gone his way, he would have been in year 7 of his run as "the man who turned Notre Dame football around." He's be fielding head coaching offers from NFL teams, not other college football programs.

Instead, he's at a Conference USA school rebuilding his street cred. You better believe that he's listening to any offer from a BCS school that's coming his way. Syracuse is a prominent-enough program and he has a personal history with us. Come to think of it, short of Georgia Tech asking him to come back and be their coach again I can't think of a better spot for him.

Would Syracuse Fans Want Him?
Are you kidding? He's a proven winner. He's a Northeastern guy. He's won on every stage he's performed on (except those he made up). He's "one of us." Who do we make the check out to?

(Thanks, Wikipedia and UCF Athletics)