So This Is What It Sounds Like When Doves Cry 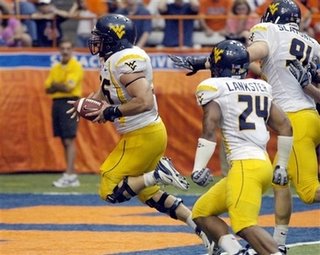 No, the most troubling thing about that game is that none of it surprised up. We have become what we feared most...Rutgers fans circa 1980-2004.

Yes, West Virginia is a fantastic team and there's no reason they shouldn't have put up 50+ on us. But the mere fact that we all looked around and saw absolutely no reason to think that an upset was possible, that we didn't even allow ourselves the minute chance that things could go our way...well it says everything you need to know, doesn't it? There were a lot of fired up quotes after the game but color me uninspired.

I believe teen pop sensation JoJo said it best when she said, "You know, it's just too little, too late." She then proceeded to do a well-choreographed dance number but that's neither here nor there. In recent weeks, Robinson has begun to wear his heart on his sleeve just a little more. Unfortunately for him, what should come off as heartfelt desire instead of reeks of desperation. He's a coach who wouldn't stray from the script for a moment for so long and now when he does, it comes from a place of fear and "please give me one more chance" than anything else.

"Let me tell you something, they are a good team. Of course they're good. But we're GOING to be good. I liked what I saw today and we have something to build on. You guys might think I'm nuts, but I could see some fight. I could see some confidence starting to develop. I saw guys flying around. When I see them in the fourth quarter still going to the ball the way they did ... they played that pitch number 35 (Owen Schmitt) and we knocked him for no gain. They were progressing and getting better."

I suppose you could say to yourself, "Gee whiz, that's great. Coach can find the good in anything." But I'd say it's more like "Gee whiz, that's sad. Coach'll say anything to spin this horrible spiral of failure into something positive."

While we're here, I might as well throw out there the latest "I Don't Know" quote of the week by Robinson. I should really get this feature sponsored:


On if this was the most painful loss while at Syracuse:
"I don’t know that. I know this, a game like this is an important game and it hurts to lose and it hurts a lot. That’s all I’m saying, I don’t know which one."

As Axeman eludes to at the beginning of his wrap-up, how painful could it possibly have been? Aren't we all too numb to this by now to even notice? One guy who isn't numb yet? Jameel McCleen. When asked how he felt about Coach Robinson wanting the team to "feel this loss"...

Nice to see someone telling it like it is. Of course, then there's WR Mike Williams:

Whatever helps you sleep at night, Mike. We know the feeling.