Mike Tranghese Knows Where You Live

Share All sharing options for: Mike Tranghese Knows Where You Live

The commissioner is still stewing about Syracuse being left out of the NCAA Tournament and, ordering up a preemptive strike that he wasn't going to take it this season, Tranghese turned the usually staid room on its ear.

"If this re-occurs," Tranghese said, "were going to have a big problem on our hands." 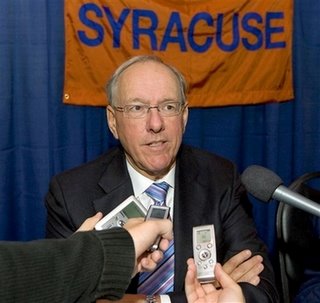 Don't make the Tranghese angry, Gary Walters. You wouldn't like him when he's angry. I'm not quite sure the solution to this big problem would be. Certainly, the Big East should always have someone on the committee ready to make a case if this situation arises in the future, but what else can be done? A Phantom Menace-like vote of no-confidence on Chancellor Committee Chair Gary Walters? Hopefully, we won't have to find out. (Although I would like the opportunity to see Jim Boeheim wield a lightsaber..."You were the chosen one, Gerry!")

You can find some more thoughts and observations from media day over at Mike Water's blog, including the fact that Syracuse players are the dirtbags of the Big East:

For the umpteenth year in a row, the Syracuse athletes were the worst-dressed group in the room. While the student-athletes from every other school were dressed in suits or dress shirts and ties, the Syracuse players wore the school-issued sweatsuits.