Knight Writers Of The Roundtable

Share All sharing options for: Knight Writers Of The Roundtable

You didn't think I was gonna let this one go without mentioning, did you?

Following the 38-14 Rutgers victory over Syracuse, Scarlet Knight beat writers Tom Luicci and Alex Delanian were asked seven questions about the game. Everything was going smoothly, until...

6. How much was this Rutgers putting it all together or Syracuse just having nothing? 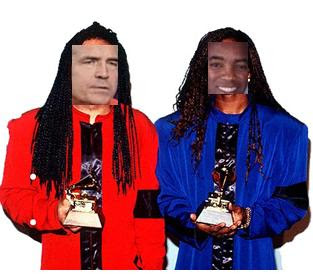 Luicci: Rutgers played well, but Syracuse is pathetic. The Orange can't run, can't defend and aren't well coached. Even Greg Robinson said yesterday it was time to assess the coaching because Syracuse was making the same mistakes over and over again. Rutgers tried to hand this game to the Orange early. Syracuse fumbled it. Oh, and this offensive line might be one of the worst in college football. They can't protect Andrew Robinson and they can't run block. Greg Robinson called Rutgers a one-hit wonder? At least Rutgers had a hit of its own. This guy is the Milli Vanilli of college coaches.

Not the first metaphor that comes to my mind, but I appreciate the mental image.

Delanian tried to keep the peace the rest of the way but Luicci decided to go full blast on the Orange:

Luicci: Once they stopped selling beer at halftime, the fans had had enough. Why stay and watch this Syracuse team if you're sober? It's a sad sight seeing the Carrier Dome filled with far more Rutgers fans in the fourth quarter than Syracuse fans. Some of them may have been left over from the basketball team's Midnight Madness too. It was Homecoming and the place wasn't sold out. This is how low Syracuse has sunk: The school needed legendary country singer Larry Gatlin to belt out a halftime tune to draw people. Buffalo had the Village People when Rutgers played. Temple had the Monkees. Now Syracuse needs a gimmick to draw because the on field product is that bad. So it's official. Syracuse is in the same class as Buffalo and Temple.

I feel like I'm supposed to fight back but...I mean, is he wrong? For the record though, we never sold out homecoming even when we were good. You know why? Cause we were usually playing Rutgers.