STORRS, CT – You would think that between two national titles, a hall of fame career, the annual Jim Calhoun Holiday Food Drive, active involvement in Autism Speaks, Coaches Versus Cancer, the Boys and Girls Club, and the Children's Miracle Network being the honorary chairman of the Juvenile Diabetes Foundation would fill up Jim Calhoun’s calendar for a while.

Fulfilling a lifelong dream, Calhoun was approved this off-season to referee NCAA football games. Because of his responsibilities close to home, Calhoun chose to only work UConn football games. While he only wished to hone his craft in obscurity, a couple interesting calls of which he was involved have people talking. 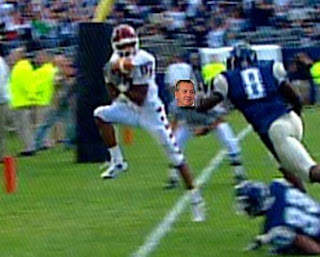 Calhoun’s first game was notable not how it started but how it ended. receiver Bruce Francis seemingly caught a tipped pass in the back of the end zone with 40 seconds remaining. The pass was ruled incomplete by Calhoun, the closest official on the field. Some questioned whether or not Calhoun correctly interpreted the rule.

"Interpret this," said Calhoun, who proceeded to pull down his pants and wave his genitals to and fro.

The uproar died down, that is, until this past Friday night when the Louisville Cardinals visited UConn and Calhoun decided to give this "reffin’ thing" another go. Suddenly, it was déjà vu all over again.

The Cardinals were leading 7-0 when Cory Goettsche punted. 's Larry Taylor moved under the ball and waved his right hand above his head, appearing to make a fair catch signal. But when caught the ball, he began running to his left and raced untouched 74 yards up the sideline for a touchdown. Several Cardinals had slowed, thinking the play was over when made the catch. 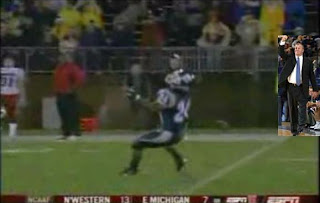 protested but to no avail. Calhoun was once again the closest referee to the play. When asked if he truly understood the fair catch rule, Calhoun deflected.

"Fair? You wanna talk fair? How bout the fact that I’ve won more games and more titles than Boeheim and I get inducted into the Hall of Fame at the same time as him. What kind of bullshit is that?"

Many critics have questioned Calhoun’s responsibility to remain impartial instead of performing the duties of a place referee in UConn sporting events given his ties to the university but Calhoun answers his critics right back.

"Some people have made the assumption that I’m doing this to help UConn. That’s absurd. Almost as absurd as something saying Jim Boeheim is a better coach than I am. Two national titles. You got that? TWO!"

Big East commissioner Mike Tranghese says he’s heard the complaints from and but his hands are tied.

"You don’t understand. If I don’t let him do this, he’ll never stop calling me with cockamamie complaints about the "special treatment" Jim Boeheim gets," said Tranghese. "It’s a necessary evil. Sorry."

Calhoun hasn’t said exactly when he plans to referee next, although he has circled the upcoming UConn-Syracuse game on his desk calendar.

"Any time I can be a part of that great rivalry, I’m going to do so. And if its in an event that Boeheim can’t be a part of, all the better."