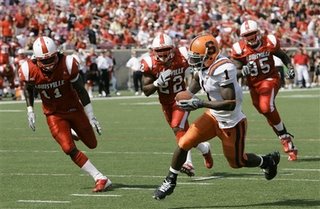 Syracuse has a colorful history of multi-sport athletes. Vic Hanson played on and captain the Syracuse basketball, football and baseball teams in the 1920's. Wilmeth Sidat-Singh was a star of football and basketball. Marty Glickman lettered in football at Syracuse and went on to become an Olympic sprinter. Jim Brown was not only a legend on the football field but also on the lacrosse field. Donovan McNabb complemented his starring turn on the football team with a stint on the basketball squad.


Could current wide receiver join be joining the list?

Syracuse.com's Donnie Webb spoke with Williams and apparently he may be suiting up for the Orange basketball team this season.

Hopkins originally spotted Williams on the court when he was recruiting Paul Harris. Williams said he wanted to play both sports but the demands of football but the kibosh on that. At least until now.

The Orange squad is pretty stacked so I don't know how much effect Williams would have on the depth chart this season. But he's familiar with some of his potential teammates (also played with Jonny Flynn) and he can certainly ball. Regardless, let's hope Williams keeps his mind focused on the task at hand right now, which would be using said hands to catch footballs.