- Fresh off their second victory of the season, you might expect the Syracuse Orange football team to savor the brief success. It’s a rate moment for the squad to bask in the glory usually reserved for the basketball team. But head coach Greg Robinson apparently doesn't see it that way. 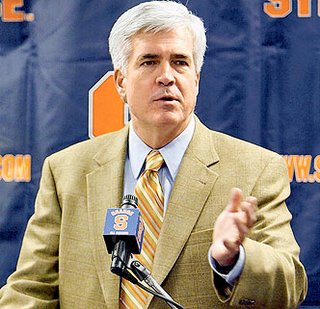 During Saturday's ESPNU telecast, it was reported Syracuse Coach Greg Robinson had some unpleasant words for his basketball counterpart during a meeting with TV crew the day before the game.

"Ben (Schwartzwalder) was here 25 years ... We won a national title one year, we'd have won like one more if he were there even longer .... We'll out-tradition their tails off. He's (Boeheim) a thirty-two-year wonder. Do I like him? No. This basketball thing? You wait and see ..."

When appraised of the comments, basketball coach Jim Boeheim said "Who?"

"Oh, is that the guy who hangs out in Pasqualoni's office? I didn't realize he was a university employee."

Robinson's football team goes for his 8th win as head coach in two weeks against Pittsburgh. Boeheim goes for his 751st a few weeks later.

(Before I get too many more emails, I should probably point out this is just a goof...)