Share All sharing options for: Buffalo Looks To Brand Itself "Syracuse's College Team"

SYRACUSE, N.Y. — Syracuse University may have invested millions of dollars and manpower in branding itself "New York's College Team" but the University at Buffalo has its sights set on a branding strategy of its own. To become the preeminent college sports program of Syracuse, NY.

"They (Syracuse) want to be the team of note in Manhattan and we think that's tops," said Buffalo Athletic Director Warde Manuel. "The same way they focus their efforts on a specific area of New York State, we'd like to do the same. It's such a big state, there's plenty to go around."

While Syracuse's strategy has been mostly financially and marketing-driven, Buffalo is letting its performance speak for itself. Syracuse has purchased billboards and taxi cab advertising. Buffalo has gone a different route, taking it to the streets.

"It is our responsibility as the Football Bowl Subdivision school in to represent the state by fielding extraordinary teams and winning with great character," said Manuel. "We have been branding ourselves as 's College team for a long time but its time to step outside our shell. In , we had guys hand out fliers for free tickets to a Buffalo football game with a purchase of crazy bread at Little Caesar's and that went over very well. This year there have already been a lot of sightings of Buffalo Bulls gear in Syracuse, mostly from those whom I sent t-shirts to anonymously through the mail. Now it's time to up the ante."

Manuel is working hand-in-hand with radio station TK99 on Bulls-related programming. TK99 recently reached a deal with Syracuse to promote and air SU content but sources say they are keeping their options open.

"It seems only natural for Syracuse's flagship sports radio station to partner with 's College Football Team, be they the Syracuse Orange or the Buffalo Bulls," TK99 spokesperson Hern Berford said. "We have one guy on staff here who attended Buffalo for a semester before transferring to Syracuse, so he's mildly amused by all of this. To see the slightly-confused half-smile on his face makes it all worthwhile."

Buffalo's one-step plan for cementing their brand in Syracuse consists of beating the Orange this weekend in the Carrier Dome. The Orange (1-6) host the Bulls (3-4) and are in serious doubt of their chances for the first time in 108 years.

"Look at the facts," said Buffalo head coach Turner Gill. "We owned them from 1896-1899. Until 2000, you could make a case that we were top dogs in New York State. We were Syracuse's team for a hundred years. The title's rightfully ours."

The Syracuse-Buffalo series is tied 3-3-1. Gill sees this weekend's match-up as a tide turner.

"No one cares what you did last year. All they care about is what you do this year and this year we are going to pillage the shit out of that town." 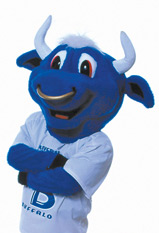 Manuel said that the University is busy preparing giant flags to plant on Syracuse campus and mounds of kindling to start a quad bonfire wherein all orange paraphernalia will be burned. The bonfire is expected to be a centerpiece for a victory dinner and banquet. Buffalo mascot Victor E. Bull wouldn't say exactly what the meal of choice would be but he made sure to note he will keeping a close eye on Syracuse mascot Otto's whereabouts all evening.

"I'm pretty sure if you open up your biology textbook, the bull is higher than the orange on the food chain. That is biology, right? Not zoology? Or is it both? I'm not too good with science, clearly, otherwise I'd be doing more with my life."

Buffalo students have also been informed that if they so choose to, they may show up at any Syracuse dorm next week and displace Syracuse students from their rooms without reason or rebuttal. A policy that has some pausing for concern.

"We realize that this could result in the Syracuse students, a motley crew of nerds and castoffs, starting their own fraternity and challenging the status quo during the Homecoming carnival with a series of wacky hijinks whereby madcap hilarity ensues and lessons are learned," said University at Buffalo President John B. Simpson. "However, it's a chance we're willing to take. We're re-watching those movies again and taking notes. Did you realize there's like six of them?"

Added Simpson, "That Booger is HY-sterical."