They Have The Internet In Iowa?

Share All sharing options for: They Have The Internet In Iowa?

A little late to the party on this one but I wanted to make you aware of an opponent the Iowa football team has had a tough time with recently. Not Northern Illinois, who they defeated 16-3 last week. And no, certainly not the Syracuse Orange.

The Facebook pages of more than 20 underaged University of Iowa football players have photos appearing to show them engaging alcohol in various ways, from drinking to posing with liquor bottles or beer cans. 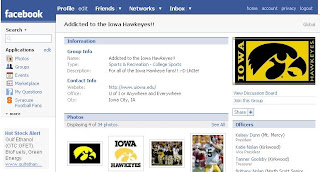 In addition, several UI football players have messages attached to their profiles that discuss alcohol consumption, racial slurs and other offensive subjects.

"She can't say no if her mouth is taped shut," is posted as a favorite quote on one player's page. Another's says, "If you send me back to jail, I'll rape your family."

First of all, I love the idea that a journalist or journalists with degrees from accredited university programs spent their days rummaging social network pages to see what kind of dirt they could dig up on Hawkeye players. It all stemmed from word that suspended Hawkeye Dominique Douglas, who along with fellow player Anthony Bowman was booted from the team for pulling a Doug Gottlieb with some credit cards, had photos on Facebook flashing booze and money along with some teammates.

Honestly, its doesn't sound all that horrible. Sounds more like a case of "boys will be boys" especially when you hear the specifics.:

That pretty much described every photo I have from college. So if anything, these guys are just guilty of being stupid enough to post photos of themselves in compromising situations in a public forum. The reporters jumped on the story for the shock appeal and I guess as far as Iowa City is concerned, this is Lindsey Lohan drunk-in-her-car-level drama.

Although I suppose you could take it one step further and call the reporters Nazis.

Propagandists like Joseph Goebbels would approve, but it doesn't address the issues, and is quite divisive...See how it works? I associated you with the Nazi propagandist, just because you used a Nazi tactic. It's similarly unfair to associate underage drinkers with misogyny...Your Neo-Prohibitionist friends resort to such tactics, but you'd be wise to refrain.

Someone get Simon Wiesenthal on the next plane to Iowa City! I think Josef Mengele is alive and he's the copy editor at the Press-Citizen! DAMN YOU MENGELE!!!!!!