SYRACUSE, – No Syracuse football players or coaches have been or are currently involved in any scandals, arrests or probes, according to police.

Unable to join the growing list of schools who can hide their on-the-field deficiencies behind off-the-field embarrassments such as Texas, Iowa or Toledo, the are forced to deal head-on with the media and fans, a situation Syracuse Athletic Director DOCTOR Daryl Gross wanted to avoid.

"I kinda just assumed sooner or later one of our players would smoke a little weed or get a little too frisky with the ladies," said Gross. "Hell, I even had my guys compile an entire strategy plan on how to deal with an HGH or steroid scandal. It just sits there on top of my cabinet, collecting dust." 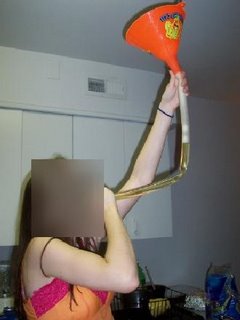 After an exhaustive search that included police records, campus safety reports and interviews with students and faculty on campus, no instances of illegal or improper activity were discovered. A probe into the habits of players uncovered no distracting stories or issues that would shift the focus away from the team’s dreadful 0-3 start to the season. For the moment at least, is demonstrating proper institutional control, which bothers some players.

"Where are all the steroids?" asks quarterback Andrew Robinson. "Every day I turn on the TV I’m seeing a story about steroids this and steroids that. They make it seem like you can get steroids out of the candy dispensers in the gym for a quarter. Well you can’t. I’ve looked. But they do keep the place stocked with Mike & Ike, so that’s a nice little bonus."

"For real, Thursday I tried to start up a group on Facebook to see who was interested in picking up a group of underage girls, grabbing some purple drank and crossing state lines to gamble on the Louisville-Kentucky game. You know how many people joined the group? None. I was like, 'For real???'"

Gross said he even had some of his assistants befriend every member of the Syracuse football team anonymously via their Facebook and MySpace pages, hoping to find incriminating photos to leak to the press. The most damaging things they found were "a before photo of a pizza box containing a meat lover's pizza and an after photo of that same empty box after Patrick Shadle ate the entire thing himself."

The onslaught of attention to ’s dismal play so far has dominated headlines in newspaper sports sections, blogs and on radio. No one has felt it more than embattled head coach Greg Robinson.

"Look at ," Robinson continued. "They’re a great example of that. Things go in the toilet around there from time to time but there’s always an arrest or a rap song with misogynistic lyrics right around the corner to throw people off. Right now we’ve got a lot of guys who are capable of doing some really dumb things. We just have to execute."

prepares for its game against 2-1 this Saturday, which happens to be Yom Kippur. Gross hopes that the community uses this opportunity to bring shame and disgrace to the campus and fans, and away from the football program.

"I’d love to see the student section come together in a show of unity and, I don’t know, jingle tiny swastikas instead of keys on 3rd down. That would be just the kind of thing to get people talking. But I guess that would actually require students to show up, and at this point, that’s no guarantee."