This weekend, Syracuse will face Louisville and Greg "I will coachspeak to you until you get tired of it and just walk away" Robinson takes on Steve "No, really, every week is the toughest week ever and we have to give 110%" Kragthorpe. Robinson's manner of speaking and saying nothing has especially grated on Orange Nation, pushing "tell it like it is" to the top of the list for things we want out of our next coach.

With that segue in mind, I give you Navy head coach Paul Johnson. You may have heard Johnson a few weeks back when he gave a delightfully candid post-practice interview that included bon mots such as: 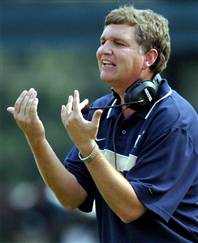 Reporter: You are favored by nine points [over Ball State].

Reporter: How many hits did they get on the quarterback?

Johnson: I don't know. I don't count them. Unless he has the ball it really doesn't matter.

Well thanks to Dave Rahme, we get to enjoy some more Johnson-goodness. Here's a snippet of his discussion with reporter Bill Wagner:

Wagner: Can I ask you something without making you mad?

Wagner: I was talking to a Navy fan and he said he follows the coverage and that he noticed something and I'm just going to put it to you. He says that it seems like when Navy loses you blame the players, i.e. we can't execute fundamental plays, but that the success of the team the last four years has been attributed to brilliant coaching. How do you respond to that?

Johnson: Whatever he thinks. I don't go down to McDonald's and start second-guessing his job so he ought to leave me alone.

I don't know much about Johnson as a coach (apparently he's pretty good) but let me tell you something, if we do indeed fire Robinson at the end of this season, I'm not saying we need Paul Johnson specifically, but we need someone just like him at the very least. (And since this is the second time Rahme has noted what the coach has to say and how he says it, something tells me he would agree)