Where's Peer Pressure When You Need It?

Share All sharing options for: Where's Peer Pressure When You Need It? 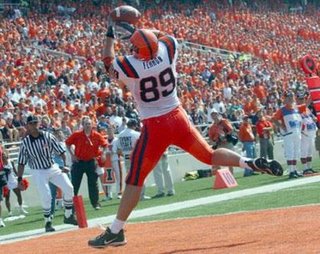 Junior tight end Tom Ferron, the team's leading receiver last season with 30 catches and 351 yards, has quit the team according to Donnie Webb. It was announced by Greg Robinson on Saturday.

"A year ago, at this time, Tommy came into my office, the first day of the season last year and wanted to quit," Robinson said. "He was with his mother and stepfather and we sat and talked and talked. Tommy agreed to stay through training camp last year. After about four or five days of training camp, he came to me and just told me, 'don't worry, coach, I'm fine and glad to be back out here.'

"Well, all of a sudden ... you know, here he is again saying, you know, I just don't think I love the game. We talked on the phone. He called and told me he wasn't going to report, that he just didn't want to play.

"I was getting that feeling ... I don't know if I was getting the feeling, I just didn't feel like he was really being involved. He didn't go to summer school. He was going to work. So, I don't know. I wasn't getting great vibes that Tommy was on fire about where he was at. It wasn't a passion for football.

"I appreciate his honesty. He's trying to get his world in order and where he wants to go with things. I wish him the very best."

That leaves fifth-year senior Jawad Neshiewat, senior Arthur Kapalanga and freshmen Nick Provo and Darnell Pratt at the position. Coach Robinson has also moved sophomore defensive end Mike Owen to tight end, a move the Daily Orange Sports Blog questions. Coach under fire, untested quarterback, star player out for the season and now our tight end quits. All we need is a female kicker and we'll be that much closer to being the Texas State Fightin' Armadillos.