All this new about a new stadium seems to have brought out Syracuse fan's true opinions on the matter of the Carrier Dome (comments here and here). While some feel the Dome is a great home field advantage (when its packed) and is an icon of the Syracuse skyline, many others are dreaming of sugarplums and open air stadiums.

Two topics that seem to caught the imagination of Orange Nation also seem to be stuck in my craw (if I were to have such a thing). Who is this shady "private developer" that refuses to be named and what does the timing of this announcement mean?

First up, the timing. In this statement, DOCTOR Daryl Gross stated that "Private developers frequently approach the University with ideas." Well if that's true, why is this approach in the public discussion and all those others aren't? Maybe perhaps cause its much more likely than you're leading on? Or is it because this is a message to someone. Or more specifically, to some conference looking to add a 12th member? A message intended to say we are going to a top college football program with state-of-the-art facilities in a few years and you might want to think twice about us?

The Daily Orange says it way contacted by an anonymous source about the deal. I would imagine if it were just conjecture or "just another developer," Gross wouldn't have commented on the deal or would have said there's nothing there. Gross also took this opportunity to lump in the official announcement that the Ernie Davis statue will be erected (tee-hee) soon. That's a pretty decent scoop to just throw out there as a footnote to a "non-story," no? Shouldn't it have been the other way around?

So if we assume that where there's smoke, there's fire, there's only one private developer that comes to mind when it comes to Syracuse-related mega-structures. Pyramid.

For the uninitiated, I'm just going to cut and paste from Wikipedia:

Destiny is a proposed retail and entertainment complex in . The project's developer, The Pyramid Companies, predicts that Destiny USA will become a major tourist destination and will have an economic impact throughout the region. The project is planned to be a green building, powered entirely by renewable resources, and is planned to be completed in three phases. Preparatory ground work for the first phase, an 848,000 square foot expansion of the 1.5 million square foot , began in April, 2007. Also part of the plan is a nearby one million square foot technology complex in the town of .

Plans, which currently include over 4.5 million square feet, consist of 13,000 hotel rooms, an indoor aquarium, a water park, an indoor recreation of the Erie Canal, a stadium and performing arts center, three golf courses, a 100 acre glass-enclosed indoor park, and a 20 acre artificial lake. This complex is to be known as Destiny , and plans for it were first made public in April 2000. There have been constant calls for the city, county, state, and federal government to give tax breaks and financing to make this project a reality.

Of course, if this has been as public and ongoing as it seems to have been, what kind of stadium did people think they wanted to put in there? I mean, did everyone think this was just going to be a new field for the CNY Express? 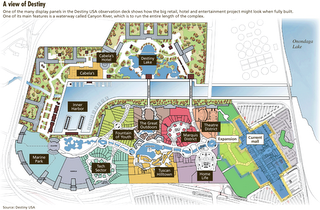 I don't have all the information and the goings-on handy, but the DestiNY project has been a major headache for all parties. Taxpayers don't want to pay for anything, developers need some tax breaks, you've got land and lake issues to deal with, not to mention the shear cost of all of this. Pyramid is too far gone into this project not to make it happen so you better believe that they're going to do whatever it takes to make this sucker the biggest and best mega-mall-lake-athletics-park thing you've ever seen.

And so, for a city defined by its university and more specifically by its sports teams, what would make more sense than to take the loyalty, love and admiration that the people of Central New York have for the Orange and fold it into their project? Why compete with SU to be the main attraction in town when you can combine them?

I'm not really breaking any new ground here, many of the commenters reached the same conclusion. I mean, what else is there? There's nowhere else on campus to put a new stadium short of tearing down the Dome which seems quite a monumental task.

As with the Big Ten rumors and so many other things recently, time will tell if any of this is even worth worrying about. I still believe a new stadium would be a great idea for a few reasons. Hate to say it but I think we should be using the elements to our advantage, not hiding from them. I also think a bigger stadium would benefit us, especially if we're serious about getting back on the road to success. Hopefully, whatever our intentions, let's hope they are motivated by trying to improve the university's standing and the Big East's standing. But you never can tell these days...

By the way, what's up with the Destiny USA website? Are they linked to the Dharma Initiative or something? I feel like I should be able to find hidden clues to unlock conspiracies about a mysterious island in the middle of Onondaga Lake. Trippy.