Share All sharing options for: I Thought You Guys Were Supposed to Cowboy Up In Situations Like This 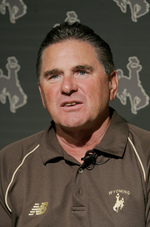 Via Donnie Webb, the Jackson Hole Star Tribune (which is exactly who you would suspect to be the leading source for news in the greater Cheyenne area), spoke with Wyoming football coach Joe Glenn about the Syracuse scheduling issue, something he's still dealing with.

"I've got a new favorite team this season," Glenn quipped. "Anybody who beats Syracuse."

"They leave a hole in our 2009 schedule, so if you want to wish bad luck on somebody this year, wish bad luck on Syracuse," Glenn said. "They signed a contract to come to Laramie and play, and they didn't honor it so I'm putting all kinds of voodoo on them."

Think about that, folks. Next time one of our players goes down with an injury or next time Coach Robinson makes a questionable call that goes horribly awry...it might not be coincidence. It may just be JOE GLENN VOODOO!!!! (Cue ominous music).

It must be comforting to the players and fans of Wyoming football that on the eve of practice, their head coach is firmly fixated on a team that they aren't even playing this season over something that has to do with next season.

UW athletics director Tom Burman seems to be of more reasonable mind about the situation.

"I was disappointed but not shocked," Burman said. "That contract unfortunately for us, and I'm sure (former UW athletics director) Gary (Barta) tried, but it only had a $200,000 buyout and financially it makes sense for them."