And not a moment too soon. You've already memorized the Husky Smacktalk Primer. Now, just in time for the big game, I thought I could arm you with a little bit more Husky-related putdownnery, courtesy of those who would know it best...Washington State Cougar fans. (I made some slight edits for our own purposes)

If by chance you hear the Husky faithful chanting their fight song, have some fun with the lyrics:

Bend over Washington.
Bend over Washington.
Your team has lost it's way, you drove Don James away.
Your men are all gay, your women all weigh, more than a metro bus
so my friends pi-ty all your friends from Washington,
they haven't figured out how bad their team is yet, so raise, a cheer, we'll kick-their-butts-and
sing the praises of Syr-a-cuse for e-ver! 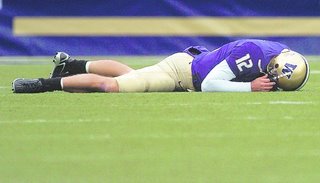 An entry in the "Huskies need a better school motto" Contest:
"The University of Washington, where the football players are big, but the women are just a l-i-t-t-l-e bit bigger!"

And by the way, shame on me for only discovering a site called HuskiesSuck.com today. They've got oodles of Husky-related fun over there, here's some of the best.

Q: What's the difference between Michael Jackson and the UW Program?
A: One lures kids into a fantasy world and uses them, is willing to pay millions to stay out of court, and has faded greatly over the years. The other is a musician.

Q: What do you call 47 people sitting around a TV watching the Rose Bowl?
A: The Huskies.

Q: What's the difference between a Husky and a bowl of Cheerios?
A: Cheerios belong in a bowl.

Q: Did you hear that The Rolling Stones are playing at Husky Stadium?
A: Yeah, they're 10-point favorites.

Q: What is the difference between a Husky cheerleader and an elephant?
A: About 40 lbs.
Q: How do you equalize the two?
A: Feed the elephant.

Q: How do you make a Husky graduate leave your house?
A: Pay him for the pizza.