Greg Robinson loves to tell us how excited he is for the Syracuse football team in that not-very-excited coach-speak way. He's all about the cliche. He lives and dies by generic statements about people giving 100% 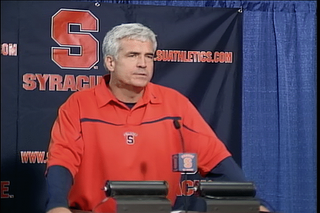 how everything is great and tomorrow is going to be the best day ever and the day after that will be even better.

There's that photo of him that we bloggers love to use. The one of him yelling full-blast into the face of one his players, who is a good 7-8 inches taller of his coach yet leaning backwards at an almost 45 degree angle in order to soften the blow. What's great about the photo is its candidness. It's the kind of photo that makes you say "Now THAT'S football." I like the guy in that photo...he gives a shit. I wanna play for someone who wants to win that bad and doesn't want to see stupid mistakes get in the way of that. The problem is, its probably the only photo of its kind. A photo of Greg Robinson showing an undeniable emotion (besides the photos of him in anguish over losing 45-6).

It sounds silly but this is all part of the bigger problem we have with Robinson. In the face of the team's poor performance in his tenure, we haven't had anything else about him to gravitate to to make us feel better. He's not cocky, like a Spurrier, whom instills confidence even if he pisses everyone else off by doing so. He doesn't bring a sense of awe with him, like Charlie Weis (rightfully or not) brought to Notre Dame. He's not a cool guy like Pete Carroll. And he's not fiery like Jon Gruden. Robinson gives us no cues, emotional or otherwise, that allow us to identify with him. So we're left to complain about his nonchalant "we'll get'm next time" attitude and wonder if he has blinders on to the seriousness of the situation.

All pre-season Robinson has been going through the motions like he usually does. But finally, thankfully, something snapped. Donnie Webb was on the scene:

There was no offensive language. His voice wasn't really any louder than normal. But the blank slate on his face and cold answers that bordered on snippy said that somewhere in Greg Robinson's world, he might have blown a gasket.

"I didn't like our day today," he said. "We took a day off, came back and acted like we were going to take two days off. We better figure out real quick, if we want to take days off, we're going to have problems. We didn't practice the way we're suppose to practice. I haven't said that very often since I've been at Syracuse. This team better get it right. You don't just walk out and it happens."

Asked what it was that he saw to make him upset? "I'll let you figure that out. That isn't very hard to figure out. Obviously, it wasn't to my liking. They didn't get going. They weren't going at the tempo I want."

Obviously, we want to know what happened. Did Andrew Robinson line up behind a tackle? Did another tight end quit? Did someone put chocolate milk in the Gatorade bottles? Did Daryl Gross schedule a home-and-home with the New England Patriots and not tell him?

Whatever the reason, it's damn refreshing to see that Coach Rob is a human being and that he's fired up. You know what, Greg? Curse a little. Go ahead. Let out an f-bomb or two. We're not gonna hold it against you. Look, we want you to be yourself and coach the way you know how. But we want to trust you as well, and the only way we're going to trust you during the hard times if is we can identify who you are as a leader. It could be many things but it seems like the only thing that really shows your fire and your heart is when you get a little pissy. Get pissed, Greg. But not in the Mike Myers-Scottish Dad way. Not until we make a bowl game, at least.