SI Gets To The Point

Share All sharing options for: SI Gets To The Point

Orange Nation continues to sugarcoat the current situation by hiding behind arbitrary Top Tens and Best Ofs that showcase our successful past or the inconsequential pieces of the present. Finally, someone has the guts to ask the tough questions. The straight poop, if you will. And that someone is Larry from Stamford, Connecticut. Sports Illustrated Stewart Mandel (and his trusty Syracuse intern Mallory) attempt to give a straight answer. 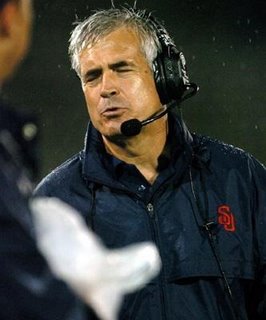 This has been coming up a lot around here lately -- from our Syracuse summer intern, Mallory Rubin. Actually, I think Mallory has thrown in the towel. When I showed her this question, her response was, "Don't count on it."

I'm slightly more optimistic, which is why my simple answer to your simple question is, yes. The more difficult questions, however, are when will that be, and will Robinson still be the coach when it happens? You know I don't like to judge a coach too soon, but I can't say Robinson has offered much reason for optimism so far. Mostly what he's done is install an offense his quarterbacks weren't suited for, generate little-to-no recruiting buzz and lose his one great hope, sophomore running back Delone Carter, five months before the season even started. I understand why Syracuse hired Daryl Gross as its AD (he's the guy who endorsed Carroll at USC), I understand Gross's long-term vision, but I just don't see Robinson as a good fit. Syracuse is a uniquely Northeast institution and someone with Northeast ties would have an easier time creating enthusiasm for that program.

I like the cut of Stewart's jib (or is it jig)? I don't know if Robinson's problem is his lack of Northeastern roots or perhaps something more akin to a lack of recruiting, strategy and leadership ability...but let's not split hairs.

Here's another simple question for you...between the guy who bought FireGregRobinson.com and Larry here, why is the state of Connecticut leading the way for Syracuse fans voicing their opinions and fighting the good fight? Does that mean there's a couple of guys in Fayetteville all riled up about Jim Calhoun's recruiting class and some guys in DeWitt about to purchase FireRandyEdsall.com?

Something doesn't feel right... I think we're headed for a disaster of biblical proportions. Fire and brimstone coming down from the skies. Rivers and seas boiling. Forty years of darkness. Earthquakes, volcanoes... Human sacrifice, dogs and cats living together - mass hysteria.