Share All sharing options for: The North Texas Quandary

Astute poster Pearl 309 over at Syracusefans.com found the EA NCAA Football 2008 screenshot of the Carrier Dome and it's a beaut. 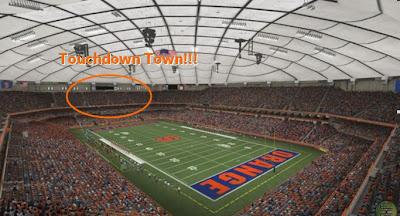 See the attention to detail. Unfortunately, they seem to have taken the screenshot from the Syracuse-Buffalo game, as the apathetic crowd attests. At least, I hope that's the deal.

As a bonus, I noted the location of Touchdown Town for you on the image. They look like ants up there...which I guess is the point when you're talking about $100 season tickets.

For a much clearer view and minus my dickish commentary, check it out here.

I for one cannot wait for the new game. If there's anything that I dork out over (and that's saying a lot considering I spent most of last week trying to figure out a gay Husky, an irritated Bull and their friends would all have a discussion), its NCAA Football on my PlayStation 2. I am a grown, married man with a full-time job with the word director in the title and I oversee a team of three people...and at least four times a week I stay up until 1am playing a video game. I don't play multiple games, I don't play different kinds of sports games and I don't even play different football games. Just NCAA Football 2007.

Oh, and I'm a dynasty guy. How much so? I am currently in the year 2031 of a dynasty in which I have been head coach of the Michigan State Spartans, Oregon Ducks and most recently, the Kansas JayHawks. I don't like playing as Syracuse as playing inside the Dome in a video game can become terribly predictable and boring. Kinda like in real life!

I enjoy building up a program from the ashes (hence all those choices you see above) and I love beating Miami and West Virginia on a regular basis. Seeing my team in the top ten, or even hoisting an imaginary national championship trophy (of which I have six in this dynasty) brings me more pleasure than I should ever care to admit.

But there is one thing that irks me to no end about this game. In the real world, when a non-BCS team makes it top the top levels of the game, I think its fantastic. In the video game world, it irks me to no end when Fresno State finishes #3 or Air Force wins the Sugar Bowl. It's unnatural. It's silly. It ruins the integrity of the game. (How did I become this way? Deep down, am I one of those cronies who wants to see Nebraska vs. Florida State every year and hates it when Boise State goes undefeated? Do I actually hate the idea of a playoff? Is the video me a conservative louse? Is he anti-abortion and wants forced prayer in schools? Does he think evolution is a farce? I fear that my video game self would find Rick Santorum to be "too liberal")

At the forefront of my hatred is North Texas. In reality, if the Mean Green ever made it to the Rose Bowl and defeated USC to end the season ranked #2 in the nation, I would consider it a victory for college football. In the video game, this happens every season and its slowly driving me insane. I've done many dynasties, not just with the 2007 version of the game but also with the 2006 version and for some reason, at some point North Texas becomes a college football powerhouse the likes of which makes Alabama and Michigan tremble. They have multiple Heisman winners, they've won the Sun Belt fifteen times in a row and they go undefeated more often than not. 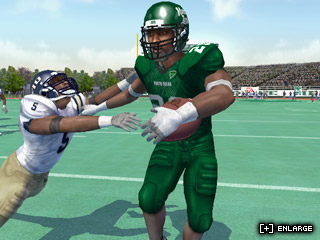 I've always figured that the CEO of EA Sports went to North Texas or perhaps the programmers are from area. I came across a message board where others plagued by the same North Texas dilemma think that it has to do with the game's inherent recruiting flaw that makes all teams from California, Florida and Texas become good (which explains why Cal, USC, Texas, Texas A&M, Miami, Florida are always in the hunt for the title and North Texas, Florida Atlantic and Fresno State are always in the Top 25 and flirting with undefeated seasons).

I decided to keep track of things for a few seasons, see if it was just me getting hot and bothered over nothing or if this was an epidemic ripping apart my quaint 1 a.m. existence. Over the course of six seasons, finished in the Top 5 three times, went to five BCS bowls and went undefeated twice. I knew what needed to be done.

Up until now I had only played the game to benefit teams. To turn mediocre programs in powerhouses. I was God. And as such, if I had the power to give success, I also had the power to take it. I took over at head coach at the . My reign only lasted two seasons before my contract was not renewed but in that time I made amazing strides. Worst recruiting class in the country both times, no conference titles and a combined record of 6-16.

I had ruined football. And it felt good.

I don’t know exactly what the point of all this is except to admit to the world that I am an uber-dork. Perhaps there are others out there plagued by the North Texas Mean Green and this will provide some sense of comfort for them. And perhaps its a statement of hope that the 2008 version of the game will be free from ridiculous team powerhouses rising from the Sun Belt Conference.

But I should let you know that my glory was short lived. As soon as I relegated from the picture, Rice went undefeated, won the Sugar Bowl and finished #3 in the nation.

Owls, thy name is enemy.