Share All sharing options for: It Doesn't Take A Real Genius...Part II

Part II of the Syracuse/Big East Football Preview, As Done Through The Prism Of Quotes From The 80's Comedy Real Genius. For Part I, click here.

For the new faces on the Orange squad who will make an impact this season. No true freshman were listed as starters on the post-spring depth chart but there's a couple newbies that will likely get some playing time. The last thing you probably want to hear is that there's a true freshman in the rotation for the offensive line but expect Jonathan Meldrum to play a part at the tackle position. The defensive line is getting an infusion of youth from two redshirt freshmen, LE Andrew Lewis and DT Anthony Perkins will both see some playing time. Meanwhile at linebacker redshirt frosh Parker Cantey (Can't Lose) will get a chance as well. In the nickel, you might be to see true freshman cornerback Matt Reid as well. If nothing else, the 2007 Orange have some experience on their side.

Chris Knight: May I take this opportunity to compliment you on your fashion sense, particularly your slippers.

For all the new unis and logos that will be appearing this year. We already know the SU helmet is getting an "NY" somewhere but we haven't seen the damage yet. Rutgers almost did the same with "NJ" but that apparently went nowhere.

Best I can tell, the only change worth noting is the new Pitt logo, which has been referred to as the "Hyena-Dog" and met with, shall we say varying opinions.

Chris Knight: Self-realization. I was thinking of the immortal words of Socrates, when he said, "I drank what?"

For the teams most likely to die a quick death this season. It's a toss-up between Cincinnati and Syracuse. Cincy has no easy time with an early schedule that features , Miami (Ohio), , Louisville and Rutgers. At least they have Southeast Missouri State to start the season with. The Orange don't quite have the luxury of starting off with a creampuff. With a first seven games that reads, at , , at , at Miami (Ohio), and
Prof. Hathaway: I want to see more of you around the lab.
Chris Knight: Fine. I'll gain weight.

(Thanks to SMB for the stats) 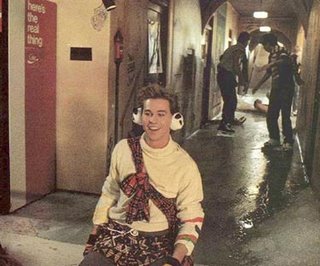 Chris Knight: You see Mitch, I used to be you. Lately I've been missing me so I asked Dr. Hathaway if I could room with me again and he said sure.

If you haven't been a Big East follower for a long time, you truly don't appreciate how weird things are right now. It wasn't too long ago than when Syracuse made its schedule, they had to decide if Rutgers was going to be Homecoming Weekend or Parent's Weekend. Didn't matter, it was going to be a slaughter either way. Now? That's how Rutgers sees us!!! We used to beat them by 60 no problem, now we lie awake at night worried about what the Scarlet Knights are gonna do to us? I guess we deserve it...I blame Pasqualoni.

To the power program in the making, USF. recruiting base, solid coach, great young core, growing fanbase, chance to prove themselves nationally against ...all they need is the current BW power structure (WVU, Lville, ) to get the hell out of the way. And if they don't, the Bulls may just take matters into their own hands in the next few years.

Recruiter: You are Chris Knight, aren't you?


Chris Knight: I hope so. I'm wearing his underwear. For Andrew Robinson. Andrew, I don't want to alarm you, but you are Syracuse football's savior. I am not being grandiose for the sake of it either. We are literally counting on your arm to save our season and bring us back to winning. We can't count on the running backs, they're injured. We can't count of the defense to do it alone, they've tried. And we certainly have no faith in Coach Robinson. That means we are counting on you to be as good as we hope you are and spend the next three years returning us to prominence. At the very least, we want to see you with a Gator Bowl patch on your right shoulder by the time you leave here. Cool?


Are you who we thought you were? Or are you just wearing someone else's underwear?

Chris Knight: You didn't touch anything, did you?


Mitch: No.
Chris Knight: Good. Because all of my filth is arranged in alphabetical order. This, for instance, is under 'H' for "toy."
Mitch: What is it?
Chris Knight: It's a penis stretcher. Do you want to try it?
Mitch: No.
Chris Knight: I'm just kidding. It's yet another in a long series of diversions in an attempt to avoid responsibility. To West Virginia's Rich Rodriguez, who decided it was better to remain in his comfy confines than take on the responsibility of the football program. It’s the smartest thing anyone in the state of has ever done.


Mitch: Oh, uh, thank you...
Dr. Meredith: Always... no, no... never... forget to check your references.
Mitch: Uh... ok... thank you. I'd better be going.
Dr. Meredith: [to his wife] I think the young people enjoy it when I "get down" verbally, don't you? I imagine this is how Syracuse offensive strategy sessions have gone the past few years.

'Ick' Ikagami: Do you think it's getting weird around here?


Chris Knight: Absolutely.
: I didn't notice.
Mitch: I like it. This whole "Big East is loaded" idea, it's still tough to get used to. Even now when the inevitable backlash has started and will probably be aided by Louisville and Rutgers' inevitable step backwards. But we could really be on the precipise of a Big East we've never seen before. With four legit yearly Top 25 programs and two or three other programs always sniffing around as well. It's weird...but I like it. 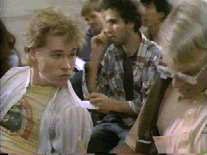 Chris Knight: Here Mitch, taste this. Go on, you won't hurt my feelings, just try it. What do you think, too sweet?


Mitch: What is it?
Chris Knight: I don't know, I found it in one of the labs.

Every Big East team has some what-ifs.


Cincinnati - How will new coach Brian Kelly adapt to the Big East? Will they Bearcats move forward? Can they in this conference?

Louisville - How will the loss of those seniors affect them? Can they possible repeat? How will new coach Steve Kragthorpe handle the bright lights?

Pittsburgh - Can Wannstadt make this team a winning team? Is it possible for someone not named Palko to lead them?

Rutgers - Was last year an abberation? Even if they do well, will their schedule give them credibility? Is Ray Rice a Heisman candidate?

South Florida - Can they all stay out of jail long enough to fulfill expectations? Are they International Bowl good or Gator Bowl good? Can they beat Auburn in Auburn?

Syracuse - Can Andrew Robinson lead them? Will the o-line allow him to? Can they survive that schedule?

UConn - Is this it for Coach Edsall? Will the two-headed QB system work?

West Virginia - Can they be the team that everyone thought they were last year? Are they a national champion contender because they're that good or because of their schedule?

Lazlo Hollyfeld: How did you do?


Chris Knight: How'd I do? I passed! But I failed! Yeah!
Lazlo Hollyfeld: Well then I'm happy and sad for you.

For the strange place

The schedule looks intimidating, especially with the inexperience and injuries we have at key positions. That said, many of those early games are winnable and if they play their cards right, the Orange could be in a position to become bowl-eligible when they face Cincinnati in November. 7-5 or 6-6 is the benchmark that Orange fans would like to hit but I think we'd still be happy with 5-7 and signs of offensive life.


The Quest For Toronto (and the International Bowl) begins!