It Doesn't Take A Real Genius...Part I

Share All sharing options for: It Doesn't Take A Real Genius...Part I 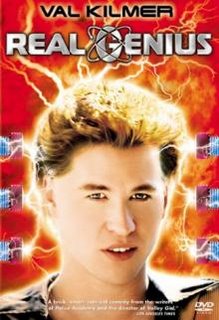 I'm not much for writing all-encompassing previews that cover every little detail of my team or of an upcoming season. Don't get me wrong, I love reading them when they're well done, I just know I don't have the patience or the time to craft a well-made one myself. I look to sites like Orange44 and CardChronicle to handle that kind of heavy lifting.

What I can provide is the kind of just-enough reporting that is lazy enough that I can get by without putting too much effort in yet with a large word count so that it really feels like I'm doing something worthwhile. I'm not here to help you win your Big East fantasy football league, I just want to provide you with information that might help you at get-togethers, dinner parties or box socials.

So for my 2007 Syracuse/Big East Preview, I'm going to need a little help. Something to help me bring all the information together. A little cohesion, if you will. Naturally, the first thing that came to mind was...Real Genius. Yes, the Val Kilmer film that is inarguably the most underrated comedy of the 80's. This not up for discussion.

Using the most famous quotes from the film, let us begin TNIAAM's official Syracuse/Big East Preview. Please note, there's no real order to anything below, its all a little hodge-podge.

Mitch Taylor: Something strange happened to me this morning.


Chris Knight: Was it a dream where you see yourself standing in sort of sun-god robes on a pyramid with a thousand naked women screaming and throwing little pickles at you?
Mitch Taylor: No.
Chris Knight: Why am I the only person that has that dream?

Professor Hathaway: You know, when I first brought you into this school I thought you'd become another Einstein. And you were well on your way. And then? 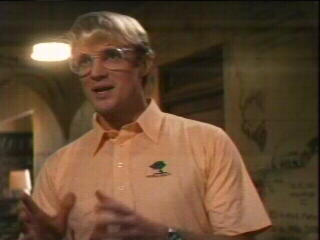 frustrated people (although I'm not getting into the sexual part...yet), there are a couple Big East coaches on the hot seat this season. Dave Wannstedt (2 years, 11-12, 0 bowls) inherited a team coming off a Fiesta Bowl appearance (albeit a shaky one at best) and brought with him the mighty expectations one would expect to come with an NFL coach with his experience. His inability to have a winning season so far has stoked the fire that will only get hotter if Pittsburgh doesn't compete for #3 in the conference this season.

You would think UConn's Randy Edsall (8 years, 41-51, 1 bowl) has his job intact, he being the one who guided the Huskies from Division 1-AA to Division 1-A pushover to bowl team in less than a decade. But his own success might have been his undoing. After back-to-back winning seasons, Edsall has suffered through back-to-back losing seasons. In a time when any team in the conference can make a legitmate run, the clamor for improvement is getting louder and louder in Storrs. Another bottom of the barrel season might be it for Randy.

Syracuse's Greg Robinson (2 season, 5-18, 0 bowls) isn't in danger of losing his job at the moment, but if he doesn't at least show some improvement this season, he'll be public enemy #1 come this time next year in the Dome.

: I'm gonna get you guys. Dr. Hathaway's gonna hear all about this. You know, you'll rue the day!


Chris Knight: "Rue the day?" Who talks like that?


, who's going to make everyone rue the day they wrote off the preseason National Title contender in 2006 after losses to Louisville and South Florida. The Mountaineers are poised to have the season everyone expected them to have last year, this year. With Rutgers and Louisville slightly down from last season, it shouldn't be too hard as long as they don't slip up along the way.

Chris Knight: Look at it this way. Considering the type of people you are and the environment you're in, you have to admit the strong possibility this may be the only chance you ever have in your entire lives... to have sex.

John, Ryan, Ryan, Ian, Ben, Rice, Niko, Adam and Jeremy, however you can parlay the fact that you're on the football team into getting some action (consentually, of course)...do it. I'm rooting for you. Orange Nation is rooting for you.

Chris Knight: put his name on his license plate.


Mitch: My mother does that to my underwear.
Chris Knight: Your mother puts license plates in your underwear? How do you sit?

Speaking of strange clothing, will anyone be able to top 2006's entry into the college football pantheon of great t-shirt slogans? 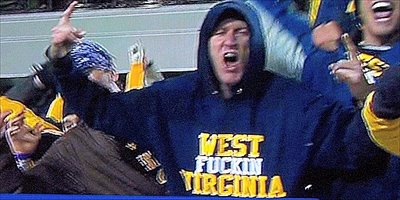 Chris Knight: First, you have to get even with . It's a moral imperative.

There's a few games on the conference schedule that represent prime revenge opportunities.


In what has become the annual Big East Game of the Year, wants back its title


Again, might have been playing in the Orange Bowl last year if not for this letdown loss


SU had the nationally-ranked Hawkeyes primed for an upset before their vomit-inducing 7-down stand from inside the two-yard-line. Wouldn’t it be nice to finish what we started? 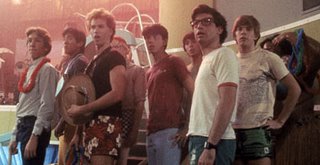 : You're all just a bunch of degenerates!


Chris Knight: We are? What about that time I found you naked with that bowl of Jello? : You did not!
Chris Knight: This is true.
: I was hot and I was hungry.

To the Preseason All-Degenerate Big East Team. Well, at least the offense is pretty solid. The defense is a work-in-progress but at least they're already working together.

WR: Branden Mclean, UConn
Stats: Two seperate charges of breach of peace (aka fighting), both arrests within four days of each other

(thanks to EDSBS's Fulmer Cup for keeping track of such things) 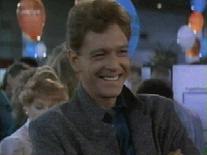 
Chris Knight: Only when chased.

A perfect segue into the wonderful world of the

backfield. So let's get up to speed, shall we?

Stud senior running back Delone Carter, the savior of the 2007 Orange? Sidelined for the season with a knee injury. I have heard the injury referred to as "Bo Jackson-esque," which is the second-worst thing someone could tell you after, only behind your girlfriend bragging about the marathon sex session she had with 50 Cent over the weekend.

Next up, Curtis Brinkley. Curtis isn't our first choice, but as long as he's healthy we'll take him. One problem...he got injured too. Not as severely, but enough that I'm about to mention incoming freshman Doug Hogue who would be expected to help out...if he didn't get hurt too. You see what I'm getting at? We're left with a hobbled Brinkley and Paul Chiara, a combo that is suspect at best.

Well, at least we don't have a running back's coach with no college experience and a quarterback without any starts to his name.

Chris Knight: OK, if you think that by threatening me, you can get me to be your slave, well... that's where you're right, but - and I'm only saying this because I care - there are a lot of decaffeinated brands on the market today that are just as tasty as the real thing. , South Florida, , and UConn to , and . Please…be gentle this year.