Share All sharing options for: The Express Goes Mainstream 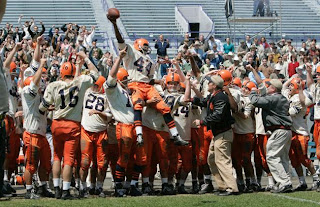 Syracuse folk love to tell the tale of Ernie Davis to their friends and colleagues who are unfamiliar with him. Unfortunately for them, but fortunately for Ernie Davis' legacy, they won't have that opportunity much longer.

USA Today broke the first major story on The Express today, complete with a beautiful photo gallery. Most important about the piece, and something echoed in interviews with the cast and crew, is that Davis' story is about to be told and his place in history may just be understood a little better by people in Emeryville, CA and Evanston, IL as much as they appreciate him in Elmira, NY. The film stars Dennis Quaid as Coach Ben Schwartzwalder and Rob Brown as Ernie Davis.

"I hope for people just to know who made it possible for guys like (former Ohio State quarterback) Troy Smith to win the Heisman," Rob Brown says.

The film will be in theaters October 2008. Mark your calendars in a vague-ish fashion.

So whose gonna camp out in front of a theater for three months awaiting the first showing of the film and blog about it? I'd do it but I've got...a thing...in September 2008, so...you know.

He was drawn to The Express because of the story of Davis, the first black athlete to win college football's Heisman Trophy. Davis was drafted into the NFL, but died of leukemia before he played a down of professional football. Anderson said the story spoke to him because of a cousin of his who died of leukemia not long ago.

"Rob (Brown's) reaction on screen, when his character finds out about his leukemia, was the same as my cousin," Anderson said. "He was so believable in the scene that he brought me to tears."