Boonah Brinkley And The Quest For Toronto

Share All sharing options for: Boonah Brinkley And The Quest For Toronto

Sure, you've heard by now that the final book in the Harry Potter saga will be coming out this week. You may be in fact anticipating it with baited breathe, eager to find out who lives, who dies and what becomes of your dearly beloved characters.

Of course, as Syracuse fans, you are already aware of a similar series of books that's also coming to and end. It's a series that's been near and dear to our hearts, with a character we all want to be like and whom he anticipate great things for. He is Boonah Brinkley and the most exciting chapter in the Brinkley series will premiere August 31st, 2007. TNIAAM was able to get an exclusive first look at the book jacket and the synopsis. Enjoy. 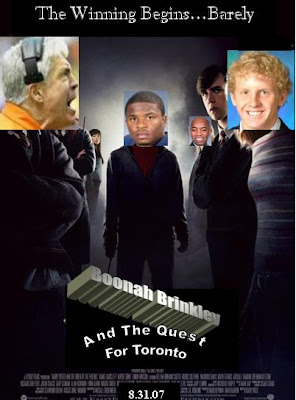 As his third year at prestigious Syracuse Academy approaches, 20-year-old Curtis "Boonah" Brinkley is at the precipice of adulthood, complete with regular outbursts of rage, a nearly debilitating man-crush on fresh-faced QB Andrew, and that rash on his feet that won’t go away no matter how often he pees on it cause he heard that works from a Discovery Channel show once. It's been yet another infuriating and boring summer with Highmaster Gross. Boonah is feeling especially edgy at the news that Delone Carter, lead "buster" for the football team, has been injured. Many wonder if the freshly revived evil Lord Pasqualomort has struck. Others wonder is Boonah is himself responsible, as it is he who benefits most. Returning to will be a relief... or will it?

The final book in the Boonah Brinkley series follows the darkest year yet for our young halfback, who finds himself on the brink of stardom after the events of the off-season. Somehow, over the summer, gossip (usually traced back to the Muggle newspaper, the Daily Orange) has turned Boonah’s tragic and heroic off-season injury into an excuse to ridicule and discount him. Even Professor Robinson has come under scrutiny by the Ministry of Orange, which refuses to officially acknowledge the terrifying truth that the team doesn’t play any Division 1-AA opponents to puff up their schedule this year unlike some of their conference rivals. Enter a particularly loathsome new character: the toadlike and simpering Paul Chiara, next in time for the lead buster position, after Boonah. With all of this firmly resting on his shoulders, how is Boonah supposed to lead the to a 6-win season and a spot in ’s prestigious International Bowl? He better figure it out because everyone is counting on him.

Boonah Brinkley and the Quest For Toronto, more than any of the previous novels in the series, is a coming-of-age story. Boonah faces the thorny transition into adulthood, when head coaches are revealed to be fallible, and matters that seemed black-and-white suddenly come out in shades of gray (and orange). Gone is the wide-eyed innocent, the whiz kid of Boonah Brinkley and the Soggy Sbarros Slice and Boonah Brinkley and the Keg That’s Not Going To Drink Itself. Confronting death again, as well as a startling prophecy, Boonah ends his year at exhausted and pensive. Readers, on the other hand, will be energized as they enter yet again the long waiting period for the next winning season in football.

Coincidentally and unrelated, TNIAAM is looking for a Photoshop expert to join the staff. Inquire within.