Whatever Happened To Stirrups?

Share All sharing options for: Whatever Happened To Stirrups?

A little off-topic but I wanted to share my thoughts on the last two nights I spent at Dodgers Stadium. I had the (dis)pleasure of watching my NL East-leading New York Mets take on the Dodgers in what ended up being a lesson in ass-kickery. 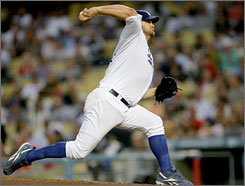 Before we delve into the game itself, I have a question. Whatever happened to stirrups? When I was in little league, it was a requirement of every awkward, pre-teen boy (and the two or three girls in the league) to wear their stirrups with the uniform. And if you put them on backwards, you heard about it.

Between both games, I only saw one player wearing stirrups, Dodger pitcher Brad Penny. Everyone else was wearing their pants all the way down. I never really stopped to think about it before. Once I honed in on it, I thought everyone looked ridiculous...like when you say a normal word fifty times and it starts to not make sense. Road...Road...Road...Ro-ad...Rooooad.

There's been a lot of talk about the integrity of the game and the honor found in its traditions and a lot of things have come along and cast doubts on whether or not we still hold baseball to those standards. Steroids? Scuffing the ball? Gambling? Impregnating 17-year-olds? I could care less about these things and the effect they have the game. 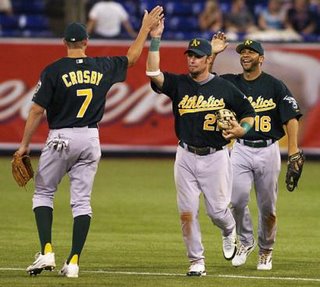 Cheating is and always has been a time-honored tradition in baseball, for some reason everyone liked to forget things like that. Gambling, sign-stealing, foreign substances...that's baseball.

But taking away the stirrups? That's un-American. I'm sure this isn't news of any kind, I assume UniWatch must have a hall of shame dedicated to this development. To those who still brave the stirrup in the face of objection, who want to look like ballplayers and not like grown men in pajamas, I salute you.

Alright, on to the games themselves. Jesus, do the Mets look bad right now. I mean, last night's loss especially. Between the miscues, the lackadaisical play and the apparent frustration they were showing (especially Jorge Sosa), I turned to me friend at one point and said they really do resemble a little league team. This is the best team in the NL? Well, since their recent nosedive, the NL East?

Pitching woes aside (and I fear for the long-term abilities of Jorge Sosa...he's one more bad start away from going Demetrius Underwood on us), they're just not hitting. It's everyone chose the same time to go into a slump, save David Wright. It's probably the best kind of problem to have, its the kind of thing that gets worked out. The problem is, while we're only scoring 1-2 runs a game, the pitching is getting worn down, and that's a problem we know from experience is NOT good to have.

Couple game notes, I just read that last night's Brad Penny-Shawn Green confrontation was due to Penny confronting Green about giving away the location of pitches. If that's true, fine, confront him, but be a man about it. Stand face-to-face with him, don't position yourself at a right angle to him and then walk away while you're giving him your thoughts. Something tells me Brad Penny has started a lot of fights in his life and not finished many of them.

God willing, this wasn't the system Green used to tip off pitches.

Orgasmic groan means curveball, eyes rolling into back of my head means slider.

I have to give some kudos to Dodgers fans, they were certainly fired up. They may never admit it, but they take a great deal of pleasure in beating the Mets. I'm not sure Mets fans have the same distaste for them that they do for us but the 'New York Sucks' chants were going on quite often both nights and any chance the crowd had to get on someone in dark blue and orange, they did. Of course, the flipside is that when I've gone to these games and the Dodgers weren't very good, the fans weren't anywhere near as vocal. I'll give them the pass though, as they are LA sports fans and as such, are trained to support winners much more than losers.

Mets are back in town end of July. Let's see if we can actually win a game this time.