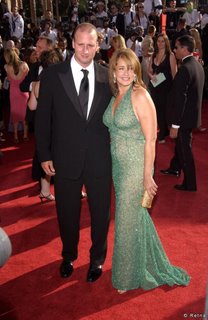 Lost in all the Sopranos drama that has enraptured our country the last few days is how this affects Lorraine Bracco's boyfriend. Just in case you didn't know, that would be former Syracuse basketballer and precursor to Eric Devondorf, Jason Cipolla.

The Palm Beach Post was privy not only to Cipolla's thoughts but a strange but wonderful meeting between he and former Browns (So...Ravens? No, Browns) QB Bernie Kosar.

Planted by the bar, former Dolphins and University of Miami QB Bernie Kosar took it all in. He shot the breeze with 52-year-old Bracco's boyfriend, former Syracuse University hoopster Jason Cipolla. Cipolla is 21 years her junior.

"I'm not judging, bro," Kosar said. "God knows I have my own social drama with my (ongoing) divorce."

Was Kosar riling up Cipolla about the age difference between he and Bracco? Was Cipolla telling Bernie Kosar that his relationship is on the rocks? Was this snippet of conversation taken totally out of context and actually referred to Cipolla's steamy after-hours sessions with Coach Boeheim? I am asking, ney, demanding further transcripts from this conversation.