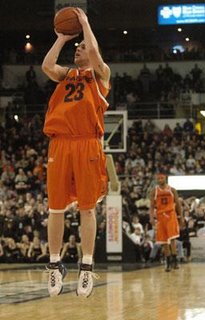 When they heard the NCAA were moving the three-point line back in college basketball, the first thing Cuse fans probably thought of was how this would affect the likes of Eric Devendorf and Andy Rautins on offense.

But what about how it would affect their defense?

What could end up being a big problem for the Orange, especially this year with a very young front court, are outlined below:

The two biggest weaknesses of zone defenses are the ability to defend the perimeter and control the rebound. Above is the case why the new rule change will help with the first, but the question is what effect will it have on the latter. Basketball physics (according to Fran Fraschilla - so consider the source) says that 70 percent of misses taken from one side of the court end up on the opposite side, thus making zone defenses especially susceptible to weak side rebounds and put backs by the offensive team. Finding a body to box out and seeing overloads on the weak side is already difficult in a zone, and will only be more so with the new rules. Here's why:

With the greater spacing, defenders will be forced to cover more ground between the offensive players and the tin. The larger gap between backcourt and frontcourt defenders will make boxing out a more difficult task. It stands to reason that with more effort on rebounding there is less opportunity to run a break in transition and more opportunity to give up easy "chip shots" and put-backs to offensive players.

Lord knows that was a problem for us this year when we had three senior big men roaming the basket, so we'll certainly be keeping an eye on it next year.