Thanks For Stopping By, Perry

Share All sharing options for: Thanks For Stopping By, Perry 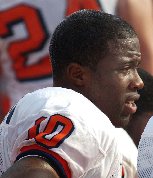 From the Daily Orange Sports Blog: Former Syracuse quarterback Perry Patterson lasted less than one day with the Philadelphia Eagles. The Eagles will cut him today following an injury to tight end Matt Schobel.

Patterson signed a one-year deal with the Eagles yesterday.

So the Eagles decided they needed to bring in another tight end. As the fifth quarterback on the roster, Patterson is the one to go.

Ouch. And this is right on the heels of his agent telling the Lancaster News that Perry is "certainly athletic enough to work as a wide receiver or a tight end. Since the draft, I talked with other teams about that, sort of putting him in that Kordell Stewart or Antwaan Randle-El mode."

Kordell Stewart isn't on a football team anymore either. Is that's what mode he meant?