SYRACUSE, NY. (AP)- Josh Wright would like to be drafted someday, preferably by an accredited professional league such as the NBA. Because of that, he has decided to withdraw from the draft and return to Syracuse for his senior season, Wright was overheard telling anyone who'd listen in his dorm's common room on Monday.

The news comes on the heels of anticipation Sunday that said Wright was overheard on the phone talking to an agent.

Those rumors were silenced when it was revealed the agent he was on the phone with was merely a real estate broker letting him know about a great room for rent on Comstock Ave. 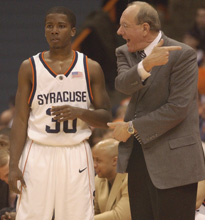 Wright came to Syracuse with huge expectations, averaging 33.3 points, 5.2 assists and 3.6 steals a game. After uninspiring freshman and sophomore seasons, Wright became Syracuse's starting point guard in his junior year. He started the first 27 games of the season..

Following a three-game absence, Wright lost his starting spot in the lineup to Eric Devendorf, and would not play more than 16 minutes the rest of the year. Wright finished the season averaging a dismal 6.6 points.

The decision by Wright to remain at Syracuse was met with mixed emotions.

"He's still on the team?" remarked a confused Devendorf. "I thought he transferred or something."

Incoming freshman Jonny Flynn had only one question. "Who?"

Wright worked out for no NBA teams but did do a couple wind sprints in front of the Tri-Delt house on Saturday with his shirt off. Wright paid $1.50 in bus fare to show up at the house but according to NCAA spokesperson Tripper McGillicuddy, that did not violate NCAA regulations due to "having nothing to do with being drafted or playing professionally, quite frankly. So stop calling me."

Wright's roommate, Chuck Feinbloom said his decision came down to wanting to be a lottery pick next season.

"I think he felt that he'd have a better chance to be drafted if he waited til next year," Feinbloom said. "Or something like that. I don't really talk to him. He just talks to himself while playing World of Warcraft all night. Drives me up the wall."

Feinbloom said Wright was told that he needs to improve in certain areas, such as "every aspect of the game and even then, start praying" by coaches and scouts.

"Josh Wright doesn't want to play in the D League," said Wright, speaking in the third person. "He's got an absolutely great shot at making himself a lottery pick next year. Plus he's handsome. Like, Denzel handsome. So there's that too."

Wright immediately becomes the eleventh best guy on the Orange next season in what expected to be a great year for the team.