The Past And The Future Collide On Premium Cable

Share All sharing options for: The Past And The Future Collide On Premium Cable

Beginning at 3:00 p.m on Sunday, June 24, ESPNU will be airing two games that showcase the recent past and the near future of Syracuse basketball. 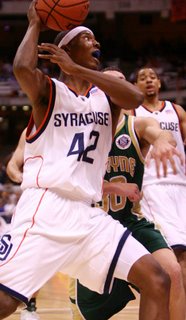 The network is airing the Syracuse-Georgetown game from 2007 to highlight Demetris Nichols' play and then follows at 4:30 p.m. with Towson Catholic High School vs. DeMatha High School, a contest that featured Syracuse newcomer Donte' Greene.

Finally, NBA scouts will be able to watch Nichols in action. All this time they've been wondering who this guy is showing up at their workouts. Without the luxury of game tape, its been impossible to tell if this guy really did play college ball. Until now...

Speaking of Nichols and the NBA, he's been on the workout warpath, taking the floor for the Sonics, the Timberwolves and the Heat.

Bill Reynolds over at the Providence Journal had some kind words for Demetris:

The word is that the NBA stock of former St. Andrew’s star Demetris Nichols is rising, with him now being projected as an early second-round pick.