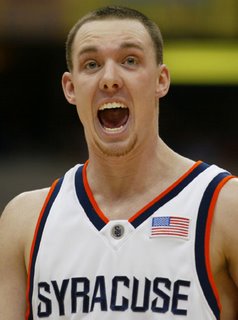 The Golden Child of Syracuse and Scranton is getting hitched.

Hope the Holy Rosary allows for tailgating. Someone get the brats, I'll bring the Yuengling. Wooooo! Go Gerry!!! Say those vows!!!

So does this mean Gerry is settling down, giving up his dreams of making it to the NBA and starting down the path to Syracuse assistant coach? Hardly. The Sacramento Professional Development League is starting up its summer season and Gerry's a part of the action. The league, which the Kings support financially and have a few players involved with, will feature a slew of NBA players and talents like Gerry looking to get some exposure.

Former Syracuse standout guard Gerry McNamara, who played last season in Greece before returning to play in the NBA Development League, is looking forward to playing this season. McNamara had a sore ankle last summer but says he now is healthy. "I have to get stronger," McNamara said Thursday morning after a workout. "That's the first and most important thing. But to get to a (NBA) camp and make a team is the goal. Get there and stay there is what it's about."

As my people say, Gerry, l'chaim on your nuptials, its a mitzvah. Now get out there and show us some chutzpah and play some ball!