Three months sit between us and the beginning of the college football season, but don't tell that to the online sports world. With all the of spring sports done it seems like no one wants to sit around waiting for the fall to talk pigskin. Washington fans and press are already breaking down the Syracuse football team as if the game was happening this weekend. And of course, the season predictions are starting to roll in as well. Who better to kick off the expectations of the Syracuse football team than a gambling website:

Covers.com laid down their odds on the Cuse this season and they don't look good, unless you're a gambler it seems. 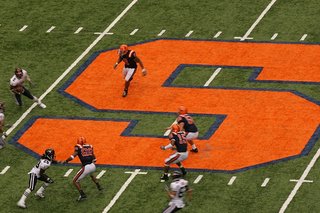 Syracuse was a moneymaking team last season, starting 2006 7-1 ATS thanks to an underrated defense. The Orange return only five defensive starters, however, and are replacing its entire starting group of linebackers. Andrew Robinson is the new quarterback in head coach Greg Robinson’s West Coast offense and he has some nice receivers as his top targets. The talent level at Syracuse, however, just doesn’t meet the other schools of the Big East, as evidenced by the 1-13 SU and 4-10 ATS conference records during the Robinson regime. The Orange also booked a tough non-conference schedule, including visits to Iowa and Louisville in September. The Carrier Dome gave ‘Cuse an edge last season (5-1 ATS), but the Orange will be hard-pressed to match that pace with the 2007 home schedule they face.

ATS stands for Against-The-Spread and not Among-Touchdown-Town-Supporters, as you might have assumed. Between Buffalo, Illinois, UConn and Cincy, I think we've got at least four wins in us. Take that, Covers.com!

Dave Rahme over at the Post-Standard asked readers to chime in with their thoughts on predicting the Big East season. Thoughts ranged from SU finishing 3rd (!) in the conference to dead last. The most commonly noted finish...4th. Bless Orange Nation, we haven't lost the faith...yet.