Every June, a secret society of the eight wealthiest mascots in the Northeast convenes at a secret estate in , known as Mike Tranghese’s basement where chips and mango-peach salsa are served.

They control the Northeastern bank money supplies, , ESPN and the student newspaper.

They are known as The Octonion.

Okay, thanks for coming everyone. As acting leader, I’d like to welcome you all to the 16th annual meeting of the brethren. I’m going to take a quick roll call and we can begin.

I decided to do something new this year. I asked each of you to grab some M&M’s on your way in this evening, but I admit my motives were a bit ulterior in nature. When I call your name, please introduce yourself and then for every M&M you took, please say something about yourself.

Fuck’s sake, man, er, bird. We’ve been doing this for 16 years. We know everything we need to know about each other.

You know what? No. No we don’t. I was talking to Bearcat the other day about what to get you for your birthday and neither of us could think of what you might like. Isn’t that right, Bearcat?

Who gives a crap. Get me a beer cozy and call it a day, and… Wait a minute…who’s Bearcat?

Why are you here?

Cause is in the Big East?

Whoa, whoa, whoa… is in the Big East? When did this happen?

Are you kidding? This was like three years ago.

ANYway, can we move on to roll call please? Alright. We already know West Virginia Mountaineer and Cincinnati Bearcat are here. ROC the Panther?

Here! And I’ve got two M&M’s, so let’s see…I enjoy water-boarding and I can get about nine inches of my own tail into my mouth.

Okay, lesson for everyone else…when you share interesting facts about yourself with the group, please make sure they are things that others would actually like to hear and not things that will make their gag reflexes start firing. Cool? Cool. Alright…Scarlet Knight?

My liege. I have chosen a trio of your cocao beans and so I will tell you these facts three. My actual name is Lord Clancy K. Fennywhistle of Shrumpshire, I work the grill at Fuddruckers during the summers to make some extra cash and on a dare I once chugged an entire bucket of dip cup water after a beer-pong tournament at Skull House.

Okay, again, word to the wise. Keep the facts interesting and noteworthy, shy away from grotesque, embarrassing stories that no one should ever hear. Who’s next? UConn Husky? 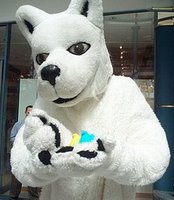 And how many M&M’s did you take?

Ew…those things go straight to my ass. No thank you.

I was calling your name.

So…look, what did you want to say?

Fuck you, you overgrown Elmo.

Why does he just speak in abstract like that?

Of which we were the champions last year!

No, um, actually we were.

But we bested you in battle!

But then you lost to us

And us, if you can believe it!

But we played in a mighty confrontation against the most fearsome of foes to end our campaign!

Actually, you beat a 6-7 Kansas State team in a bowl game no one watched and almost wasn’t on TV at all.

But victory shall be ours in the year of our lord 2007, yes?

Actually, we’re the trendy pick. Not you.

………Last season wasn’t as great as I remember it, was it?