Diamond In The Rough

Share All sharing options for: Diamond In The Rough

I can assure you Boston College fans do.

In 2004, all BC had to do was beat the lowly 5-5 Syracuse Orange to ensure themselves of a Big East crown in their final season with the conference. When Damien Rhodes, Syracuse's starting halfback, went down with an injury in the first quarter, starting corner Ferri filled the role. In the Orangemen's (technically we were at the time) 43-17 victory that day, Ferri had 28 carries for 141 yards and returned an interception 44 yards for a touchdown - one of three he scored - while playing defense. He was named the offensive and defensive player of the game. 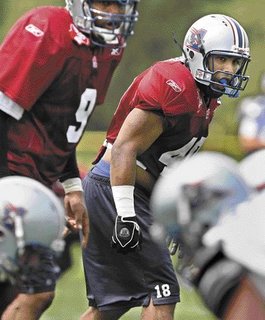 Ferri is one of the few bright spots in Syracuse football from the last few seasons. Unfortunately the professional game hasn't been as kind to him. He began his career with the Giants, but was released early in the season. Picked up by the Falcons, he went to NFL Europe where he played well for the Amsterdam Admirals. Released by Atlanta after the 2005 season, he was signed by the Cardinals where he played in three games, only on special teams. Ferri eventually made his way to the CFL, playing one game for the Toronto Argonauts before being released.

But let it never be said that there is any quit in Ferri. He's trying to catch on with the Montreal Alouettes this year, and apparently doing a pretty good job of it.

Ferri appears to be making believers out of the Alouettes. He came to training camp as a free agent, attempting to stick at strong-side linebacker, where he had virtually no shot of dislodging veteran Timothy Strickland. Ferri eventually was switched to the weak side, which appears a better fit, although he was a safety at college. With John Grace sidelined with a tight hamstring and doubtful for tomorrow night's exhibition game against the Argonauts at Molson Stadium, Ferri has been practising with the starting defence.

"He's a great athlete," Alouettes general manager and head coach Jim Popp said. "He has a high motor and is physical. As long as he does the proper things in games, he has a chance to stick."

But, as seems to be the trend these days, if football doesn't pan out for Ferri, he's got a back-up plan. Mixed martial arts. He's undefeated in six amateur ultimate fighting bouts so far. For his sake, let's hope he doesn't have any Johnnie Morton in him.

(Thanks Syracusefans.com for the tip)