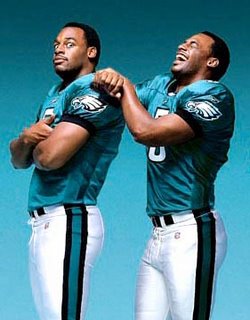 By now you've heard the latest Donovan McNabb blow-up over the drafting of Kevin Kolb. Yes, Donovan should keep his mouth shut and he should know better. And yes, the media blew it out of proportion by choosing to talk about one part of what he said and not the whole thing (in which he said he was excited to mentor and work with Kolb in the preseason).

Certainly the drafting of Kolb sends a message, albeit not one with as sudden of implications as some might think it means. As crazy as it sounds (and as old as it makes me feel), Donovan probably doesn't have many productive years left. He's a 30-something mobile quarterback with multiple injuries...just ask Daunte Culpepper or Randal Cunningham how that works out when your body begins to break down.

Don't get me wrong, I wish Donovan ten more years in NFL and I hope he gets the chance to win a Super Bowl (although I'd prefer it to be with a team other than my Giants' rival).

But the truth of the matter is this…no matter how this goes, things will not end well in Philadelphia for Donovan. If you can be sure of anything, it is that sooner or later Donovan will be run out of town. Assuming he doesn't win a Super Bowl he will be labeled a failure and he will be dismissed by the local media and fans the same way he was dismissed when he was drafted. Most of it will be unwarranted but that's irrelevant in a city where they pummel Santa Claus with snowballs. In the end, Donovan will walk away like Jack Nicholson's Jake Geddes in Chinatown..."Forget it, Donovan. It's Philadelphia."

McNabb will finish his career elsewhere. Probably sooner than later. Be it in Jacksonville or Carolina or Buffalo or somewhere else where they'll willing to roll the dice with an aging scrambler with his kind of pedigree. Over time maybe he'll come to be remembered fondly in Philly. They might even retire his jersey one day. Hell...if they can do it for Patrick Ewing in New York they can do it for Donovan in Philly. But there will also be some resentment there, be it from McNabb, the fans, the media or all three. That's just the way it is in that town. Donovan can either keep talking and keep feeding the frenzy, or he can just accept it and do what he's got to do. I guess I don't blame him either way.