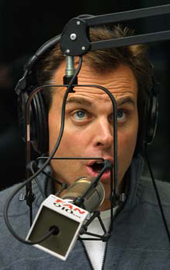 Good to have The Big Lead back. As you may have heard, ESPN host Colin Cowherd instructed his minions to visit the Lead and crash it, which he did. The site was down the remainder of the week. It's back up now and they're getting back on their feet over there.

EDSBS has the transcript:

"You and I are straining the system, that what I heard…We occasionally, once a week…we’ll mention a website, our listeners will flee to it, and we’ll shut it down. We feel bad about this, we don’t mean to do it. It usually forces that young guy or young gal to buy more bandwidth and can be expensive. I don’t know that…but wouldn’t it be great if every day we gave out a new, young website and blew it up? If I told my audience every day–just one that’s annoying–and we could give it to them, and our audience would blow it up?

I want everyone to go to it as fast as you possibly can. When I say go, go….it’s three words. THE BIG LEAD dot com. THE. BIG. LEAD. DOT. COM. Go now."

Strange that Colin has such a hatred for blogs, since its a fact that he gets some of his bits from them.

I'll never really understand sports radio. It exists in a universe that's outside common sense sometimes. I don't think these guys believe 75% of the things they're saying, they just have to say it for the sake of making "good radio." Even before all of this, I used to listen Cowherd but his ability to beat a topic into the ground beyond all interest and his faux machismo was just too much for me.

If you really want to hear great sports radio, try Ferrall on the Howard Stern station on Siruis. He's rapid fire, he's tells you exactly what you need to know, he brings on insightful guests and talks shop with them and he's a pretty funny dude to boot. He's not self-important and he's not there to do bits. It's like listening to anti-sports radio.

And I'll never understand why "mainstream" journalists hate bloggers so much. Do bloggers go around trying to take the sports writing jobs at the LA Times or something? Call me crazy but its usually sports writers and personalities attacking us bloggers. There's room for all of us, guy. Sorry you feel entitled cause you spent $130,000 at the Newhouse School and I signed up for a free blogger account. Not my fault.

And at the end of the day, what's the difference between a radio show and a blog? A guy sitting on his pedestal, talking about whatever he wants to whoever wants to listen/read.