Share All sharing options for: Who Would Win In A Fight...1986 Jim Boeheim or 2003 Jim Boeheim

I say 2003 Jim Boeheim. Wiser, more learned and less hair to weight him down. 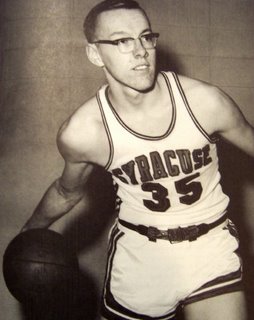 Mike Waters at the P-S posed a similar question, albeit one that involved the entire Syracuse team from the school's memorable squads. Who would win in a tournament that pitted the eight best teams in Syracuse history against each other? Who is the Syracuse University's All-Time Champion. Your eight challengers are:

The most notably snubbed teams include the 1988-89 team that went 30-8, 1979-80 team that featured the Bouie and Louie Show and the 1999-00 version led by Etan Thomas, Jason Hart and Ryan Blackwell. I think those first two teams merit some re-consideration. I know we're trying to be nice and get different eras involved but, man, a 30-win season that's not good enough for this tourney is like saying a 10-6 record in the Big East isn't good enough to make the NCAA tourney....

Anyway, looks like things have already kicked off. the #1 seed 2003 squad dismantled the 1966 team 118-95. Here's a question though...when Jim Boeheim the coach and Jim Boeheim the player shook hands after the game did the universe fold on itself? Did they spontaneously disappear or melt into each other like in TimeCop? And how come Jean Claude Van Damme never did another TimeCop movie? That was one of his not-so-bad films. 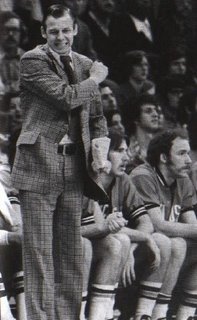 Game two pitted the 1975 Orange vs. the 1986 Orange. A nailbiter, the game went to OT where the two teams traded the lead back and forth until Jim Lee won it for the '75ers with his last-second jump shot from the wing, giving them an 82-81 victory. It's an especially sweet win for coach Roy Danforth, whose been waiting to stick it to this Boeheim kid for years.

It looks like a new game will be "played" daily so check in tomorrow at The Post-Standard to see the winner of the next first-round matchup. Is it wrong for me to be rooting for the 2003 team? Is that kosher? Do I need a life?