Time To Put Our Money Where Our Devendorf Is

Share All sharing options for: Time To Put Our Money Where Our Devendorf Is 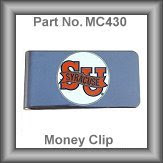 The folks over at PROTRADE have added NCAA Basketball to their listings. They've announce their IPO for the Top 25 teams but the rest of Division 1-A will go live on Monday. Hence, Syracuse's initial price is about to announced and I couldn't pass up the opportunity to make my case to quantify the value of Terrence Robert's free throw shooting in the form of a stock price.

So its actually a pretty easy process as far as I can tell. The price is an accumulation of a few variables. For every regular season win, you add $3. For each Conference Tournament Win, $5. $5 If your teams make the NIT Tournament, every win is $5. If your team makes the NCAA Tournament, its $10 for qualifying and $20/win. $10 more for making it to the Final Four and $10 for making it to the Championship game. And a bonus $10 for winning the whole shebang.

So let's apply this to Cuse. Currently, the Orange have 15 wins, which gives them a base of $45. They have eleven remaining regular-season games against St Johns (2), Louisville, Notre Dame, DePaul, UConn (2), South Florida, Providence, Georgetown and Villanova. Without getting into specifics, I think it would be fair to say that this Orange team will go 7-4 over that stretch. Perhaps that a little optimistic but remember that the BE is a little down this year and so far, Cuse has proven that they can at least keep pace with anyone (save Pittsburgh). That brings us to 22 wins, or $66.

Big East tourney time, Cuse should be about a #3 or #4 seed if this holds up. As we all know, at that point its a crap shoot. They'll get a bye so that hurts the seeding a little (I don't think that bye counts as a "win" in the points but let's assume it doesn't.) If I was a little optimistic with the season, I'll give in to the pessimism in the tourney and say the team will win 1 and lose 1. So that's an extra $5 for $71.

By this point we'll qualify for the NCAA Tourney ($10, $81 total). Once there, we're looking at a #6-7 seed and the huge variable is whether or not this is a team that can get to the Sweet Sixteen. As a fan, I think its possible, but right now its hard for me to sell that. If we give the Orange one tourney win (still an improvement on last year), that's $20 more for a $101 grand total.

Am I crazy? Right on target? Head over to the Syracuse page and voice your own opinion. You can probably help shape the opening price on Monday.