A Tale of Two Halves

Share All sharing options for: A Tale of Two Halves 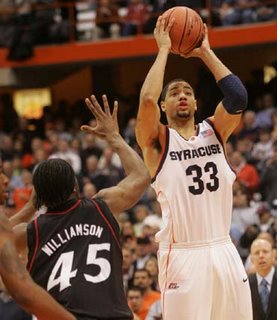 Marcus Sikes went 8-12 from beyond the arc and scored 24 to help the Bearcats give the Orange everything they could handle in the second half, but Eric Devendorf iced the win with 12 seconds left for Syracuse.
In the first half, everything was clicking for the Orange. 48 points is the highest total at intermission on the season so far. But despite leading by double digits throughout, the Bearcats chipped away at the Orange with a 10-0 run around 7-minute mark, followed by a barrage of threes by the playing-out-of-his-skull Sikes.


Demetris Nichols led the Orange with 22 points, while Terrence Roberts and Darryl Watkins each grabbed ten boards and Watkins blocked a gaudy 8 shots. Devendorf and Roberts each contributed 17 points.


The win improves SU to 15-4 overall and 4-1 in the Big East. With things as shaky as they are in the conference, that's as good as gold so far.


Sidenote, via Cuse Country, I came across this rumor about the eligibility of Eric Devendorf. Considering his work this evening, lets all just block this from our feeble brains until otherwise forced to deal with it.