Ray Rice Doesn't Play Basketball Too, Does He?

Share All sharing options for: Ray Rice Doesn't Play Basketball Too, Does He? 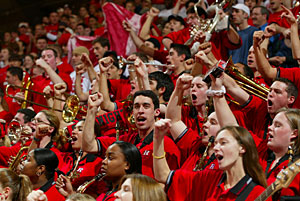 Where: The RAC (I don't care who the sponsor or honorary name is), Piscataway, New Jersey

Wins/Losses: Rutgers started slow...very slow. Losing to Bob Huggins' Kansas State to open the season and then lose four of their next five to mediocre teams. They followed that up with five wins that included Princeton, Iona and Lehigh. After an ill-fated visit to North Carolina (48-87) the Knights opened Big East play with a close loss to Seton Hall and a win over Cincy.

Why Cuse Will Win: Rutgers is among the Big East's worst shooting teams, with some of the worst three-point, two-point and free throw shooting percentages in the country. Throw in the fact that Cuse is holding its opponents to 44% shooting to begin with... (Source: Orange44)

Why Cuse Will Lose: The RAC is tough and the fans seem to come out to see the Orange lose. Plus, all the signs point to Cuse winning...that's never a good thing.