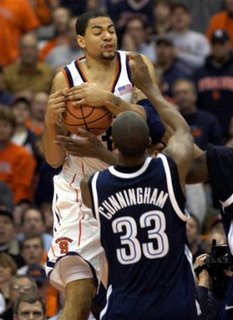 God, sometimes even I'm embarrassed by the headlines I come up with. And yet I don't erase them...

Don't look now but the Syracuse Orange might actually have something here. Terrence Roberts put up a Dwight Howard-esque stat line (17 pts, 14 boards) and Demetris Nichols led the team with 23 points as the Orange knocked off Villanova 75-64. A 14-2 run to start the 2nd half gave Syracuse a 52-39 lead with and the Wildcats never moved closer than nine points the rest of the game.

It was a pivotal win for the Orange, Villanova had to be considered a comparable Big East team up until this point and the Orange have pieced together a nice little collection of wins to offset their early-season RPI nightmares.

Not lost in this also was Terrence Roberts 5-5 night from the free throw line. Somewhere, OrangeHoops is smiling.

Orange44 makes the disturbing discovery this week that only a dozen games remain in the Orange's season, opening up the inaugural debate for seeding in the NCAA tourney. In a great breakdown, they note what's working in the Orange's favor (conf. record, Pomeroy rank, record against RPI 51-200) and what isn't (record vs RPI 1-50, non-conference RPI and notable victories). While the non-conference stuff is pretty much done and out of our hands, Cuse does control their own destiny with the Big East games ahead.

For a more specific view of where the Orange stand, let's check in with the poor man's Mel Kiper r., Joe Lunardi. Over at his Bracketology board, Joe currently has Syracuse as a #12 seed and as one of the last teams in. Obviously this is from before the recent week and sure to change, but its nice to see where Joe stands on the Big East, with two teams in his Last Four In (Nova and Cuse) category and one in his Last Four Out (Providence).

Stay out of the Northeast for a while, Joe. Not a threat so much as a desire.