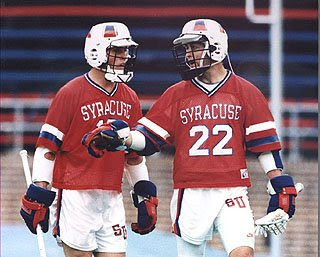 Maryland, Cornell, North Carolina, Johns Hopkins, Syracuse, Princeton, Virginia. It's a vertiable who's who of NCAA lacrosse. If you were going to pick a handful of universities to stand out and represent the sport, these would probably be your choices. And among these 7 schools lies the greatest lacrosse team to ever rip some rope. The questions is...which team is it?

Inside Lacrosse is looking for a little help in deciding what team is the greatest lacrosse team of all time. Your choices are Maryland ('70), Cornell ('77), UNC ('81), Hopkins ('84), Cuse ('90), Princeton ('97) and last year's Virginia squad. The stats are laid bare for all to see and you could make some valid arguments for many of the teams.

But of course, I'll just stick to the Orange.

Honestly, the case for the 1990 Orange(men) squad is a good one. They scored the most goals (271) and thier Goals-per-game was a gaudy 20.85 with a margain of victory a little higher than 11, personified by thier demolition of Loyola 21-9 in the final. They did give up the most goals of all the teams listed here but that makes thier margain of victory even that much more impressive. Plus they did all of this with the least amount of All-Americans of all these teams (7).

But what do I know? Instead, go here to see the voting...where most people seem to agree with me anyway.