Share All sharing options for: The Scarlet/Orange/Red Storm-y Elephant In The Room 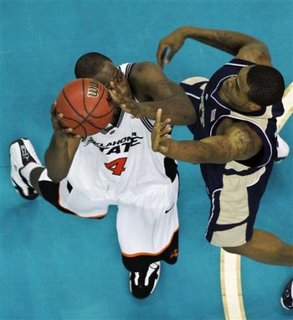 I vote in the weekly Big East Bloggers Weekly Power Poll and I have to tell you…it’s getting hard. I mean, ’s loss kinda elevates UConn into the #1 slot and by any account can we really say UConn is the best team in the conference? As fans, we know better than anyone what the value of a creampuffed schedule through November and December truly is. The Huskies, Panthers, Irish and Golden Eagles seem to make up the cream of the conference right now. After that…it’s a real wrasslin’ match trying to differentiate between , , , and Seton Hall right now. No one looks too good or too bad…mediocrity has seeped in. Take the top tier teams…, UConn, Marquette, Notre Dame and we’ll throw and Villanova in the mix as well. Three weeks ago, there was an undercurrent of support for and for legit #1-type teams. Now? Good but flawed teams that seem to be the best the conference has to offer. UConn is untested and probably ranked higher than they should be. Notre Dame has to be given some serious consideration as the best team in the conference at the moment, but admit it, you still have doubts. As for Cuse and Nova, they’re playing like 8 and 9 seeds rights now…and that might be the reality of the situation. What’s most troubling about these schools is that some of them share losses to non-conference teams. Drexel, of the Colonial Athletic Conference, has wins over Villanova and . has dispatched with and . has a convincing win over and a gutty win over . Sure there’s been some good non-conference wins…Notre Dame over Alabama, DePaul over Kansas…but what was a fluke and what was for real? Head-to-head, the Big East isn’t measuring up right now. 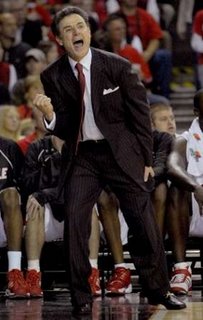 Once you get past the "tourney" teams, the Big East is just a sea of mediocrity right now. , and look the most likely to be able to rise above but what the hell happened to Seton Hall, , and DePaul? (Especially …Pitino’s losing his touch) By no means am I giving up hope. We all know what happens when you start to draw conclusions in December. But I think its okay to start worrying. It’s a big weekend for the conference. has to right itself tonight against Hofstra. Tomorrow, has its hands full with NC State, DePaul welcomes into town, hosts and gets frisky 10-1 . The conference needs to re-establish itself this weekend as Big East play begins next week…then we find out exactly who’s for real and who’s not. You know, this raises an interesting point. Over here is a conference that has no stand-out teams, a mostly mediocre base and is not competing at the same level as the other major conference in the country. And over here is a conference that had three highly-ranked teams competing for national prominence, sending a majority of its conference teams to the post-season and maintaining a healthy competition in and out of conference. Now you tell me which conference is Big East Football and which is Big East Basketball. Disturbing...