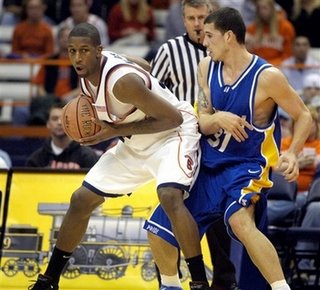 Don't look now but Demetris Nichols leads the Big East in scoring. His 19.6 points a game is a mere 0.1 better than Villanova's Curtis Sumpter so who knows if this will all change by the time you read this. He's also leading the team in free throw percentage and steals. Say what you will of the Orange so far this year but you have to be impressed with Nichols and his ascension to team leader on the court.

But don't take my word for it, take this guy's. Here's his thoughts on Demetris and his improved play this year:

On a team returning four starters from a year ago, along with the addition of highly-touted freshman Paul Harris, no one could have expected the kind of stats forward Demitris Nichols has put up so far for the Orange. Last year, Nichols’ stats were certainly respectable – 13.3 ppg and 5.8 rpg in 33.3 mpg. However, this year he is averaging an impressive 19.6 ppg. Plus, his shooting percentage has climbed from 42.7% to 50.0%, and his three-point percentage has leaped from 35.4% to 50.0%. Even his free throw percentage has risen significantly, from 67.7% to 90.9%.

Nichols displayed tantalizing glimpses of his talent last year, but he was plagued by inconsistency. So far this year, he has scored in double figures in 13 of 14 games. Over his last five games, he averaged 26.6 ppg. During that stretch he scored 26 points against Oklahoma State, 28 points against Baylor, and 31 against a solid Drexel team. If he continues to score at such a prolific pace, the 6’8" senior will be in the running for the conference scoring championship and possibly Big East Player of the Year.