Share All sharing options for: Doing The Carmelo Moonwalk

Quite the Syracuse-related weekend, so much so I had to chime in early.

You may have heard, cherished alumni Carmelo Anthony took a swing at Mardy Collins, presumably as a pre-emptive strike against any snitchery. Now I don't think anyone can defend Anthony for his actions, it was well-beyond the protection of any teammate and he didn't help matters by backing out of the melee and high-tailing as if he was trying to escape without being seen. That said, Isiah Thomas and Nate Robinson's attempts to play the world's smallest violin after the game are laughable. Suspensions should come swiftly.

As for the current incarnation of the Syracuse basketball team, the Baylor Bears came to town yesterday (eventually) and after all their troubles, Demetris Nichols matched his career high, scoring 28 points, including 10 straight in the first 2:31 of the second half, and Cuse beat the Bears 94-71. Nichols has now scored more than 20 points in six of his last seven games and is 13-24 from the 2-point line in that stretch as well. In the two areas the Orange needed to see improvement most, they won the turnover battle (12 to 14) and dominated the rebounding battle (50 to 27). Now if only they could get the three-point shooting under control (7 of 22). Up next on Tuesday is the 6-2 Drexel Dragons.

In other news, the Big East had a troubling weekend overall. In the marquee match-ups, top team Pitt lost its first game of the season to Wisconsin, who now has two wins over arguably the two best teams in the Big East (along with Marquette). Louisiville got beat down by Kentucky and Cincinnati got embarrassed by mighty Ohio State. It's not time to ring the doomsday bell just yet but I think we may have to begin giving credence to the idea that Big East isn't as good this year as last year. 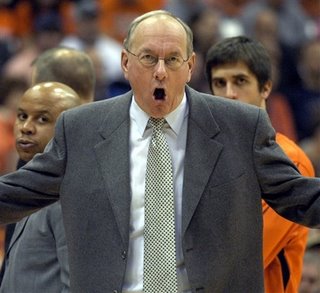 In his NBDL debut for the Bakersfield Jam, G-Mac scored nine points in thirty minutes of an 89-74 loss to the Anaheim Arsenal. Lots of things happened in the game but let's be honest with one another...there's really nothing else worth noting now is there?

Finally, thanks to Cuse Country to finding this photo of the Dark Lord himself...Jim Boeheim! Minas Tirith is not safe! Sound the horn of Gondor!!!