The Road To The National Title Goes Through Piscataway

Share All sharing options for: The Road To The National Title Goes Through Piscataway 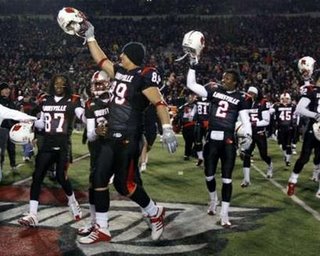 Well, that was fun.

You know, say what you want about the Big East and the quality of the game between The Ville and West Virginia, but its not very often you get a 78-point performance in a game of that calibur. When did the Best East and the Pac-1o trade identities? What's even crazier is that the biggest game in the history of Lousiville football is about to be followed up by...the biggest game in the history of Rutgers AND Louisville football.

I grew up twenty minutes away from New Brunswick, the home of the Scarlet Knights. I imagine if you lived twenty minutes away from Notre Dame or Michigan or even Syracuse, you probably had season tickets or at least a healthy obsession with the local program. I never attended a Rutgers home game ONCE until college. Barely even realized there was college football going on down Route 18. And I was a huge college football fan at the time. THAT'S how absurd it is that Rutgers is about to take part in this game.

As for the Mountaineers, I have a feeling they'll be just fine. At worst, they're looking at a Gator Bowl and at best, a BCS bid. And hey, if Rutgers actually pulls it off, they're back in the hunt for the conference and go head-to-head with the Knights end of November. We only hope that things work out in the NFL for many of these guys...otherwise may they have a long and friutfal career in INDUSTRY (via Deadspin).

Someone wake up Miami, Virginia Tech and Boston College...there's some meaningful football going on in these parts.