Share All sharing options for: Miami's Season Actually Gets Worse 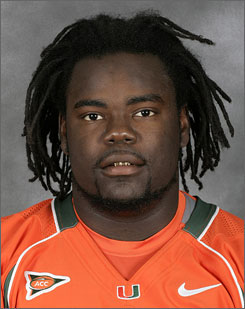 Bryan Pata, a senior Miami lineman considered a strong pick for the NFL draft has been killed, police said today. Pata lived 4 miles off campus and police were called at 7:30pm last night, although the 911 caller is either not being identified or is unknown.

Everyone has kind words for Bryan and whatever you think of the Miami football program, its a tragedy and a damn shame. Coach Larry Coker has already said the team will play this weekend against Maryland and you could probably make a case on both sides of that decision but ultimately, I think the Hurricanes will just want to wrap this season up as quickly as possible and forget it ever happened.