Share All sharing options for: If You Stuck A Lump of Coal Up His Ass In Two Weeks You Would Have An Orange

Sorry for the lack of posting the last few days, been a hectic week. But that's all over now and its time to get back to doing what we do best...alerting you to the minutia of Syrause athletics.

The basketball team had an auspicious start to their ehxibition schedule, beating Division II Bryant University 92-86 last Wednesday. The Orange "defended poorly, committed a whopping 24 turnovers, got out-rebounded by a team whose tallest starter was 6-foot-7 and didn't play all that well offensively." So what's the bad news?

But all was forgiven after Demetris (did we ever a ruling on pronouncing that correctly?) Nichols scored 18 and the Orange cruised to a 99-51 win over Cal State-Los Angeles, whom I have never even heard of and I have lived in Los Angeles for four years. 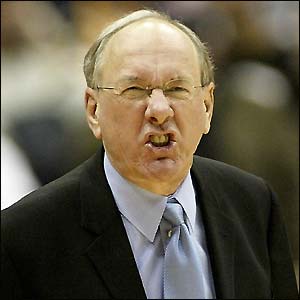 What does all of this mean? Abolsutely nothing. The Orange begin the regular season at home Friday against St. Francis as part of the Black Coaches Association Invitational, which, is a strange name for a tournamentinvolving Syracuse, especially when you take a gander at the lanky white guy who roams the Syracuse sidelines. I could buy that Jimmy B is 1/8 Native American maybe, but something tells me the black coaches in question didn't do thier homework.

Orange44 has a great Orange B-ball preview over at thier site. They make the good point of noting that we won't really know what the team is capable of until December 2nd against frisky tourney team Wichita State.

And if you're feeling nostalgic, OrangeHoops has a great rundown of Cuse's place in basketball history that segues into the eternal discussion...who will eventually replace Boeheim?

Oh and Rivals.com announced thier choices for Preseason All-Big East Team. No Cuse first-teamers but Eric Devendorf made Second Team and Paul Harris was a Freshman selection.

And the initial AP and ESPN/USAT Polls are out. Cuse is #20 in both. Pittsburgh is #4/#5 respectively, G'town is #8 in both, Marquette is #16/#17 respectively and UConn is #18 in both. Florida is your preseason #1 but we all know how that usually works. And for good measure, George Mason, who I am willing to bet any amount of money don't even make it back to the tournament, received only 1 vote in the AP and 6 in the ESPN. How soon we forget.

As for Greg Robinson's Lonely Hearts Club Band, they take on a rejuvenated South Florida in Tampa. A few weeks back, this looked winnable. Now? Well let's just say we can't get to 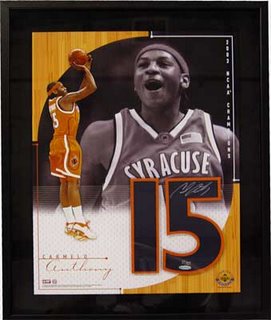 November 18th and UConn quick enough. I can only hope that a few Syracuse faithful are going and will document thier travels and illogical mascot taunts.

And it wouldn't be right if we didn't give a little shout-out to Carmelo Anthony. Either he's just a good guy looking out for those who helped him along the way or he really really hates Manley Field House. Anthony pledged $3 million to his old school for a new basketball practice facility. The facility will be named after him, which is impressive seeing that a) he'll have a building named after him before Boeheim and b) he was only there for about 300 days.